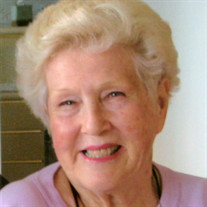 Elsie Mae Bowes Alomia, age 94, of Greensboro went home to be with the Lord on Friday December 3, 2021. Elsie Mae was born on March 31st, 1927 in Caswell County, North Carolina. She was the daugther of the late John Willie Bowes and the late Essie Murray Bowes. Elsie was courted by and married Pedro Antonio Alomia and went with him to Quito Equador where she helped open a textile factory. There she learned to speak Spanish fluently, a skill which she ensured she kept throughout the remainder of her life. After several years in Quito, Elsie Mae returned with her husband and daughters to Caswell County. She then went to work at Lorillard, where she started as a packer, moved to an oiler, and then finished her career as a fixer and mechanic. Elsie had great pride in being able to "keep up with the men" in a time when it was unusual for women to hold such positions. She worked at Lorillard for 27 years. Following her retirement from Lorillard, she worked for many years at the Cobb Chiropractic Clinic, where she held numerous positions including office manager and front desk receptionist. In addition to taking great pride in her work, Elsie Mae also took great pride in her garden, her yard, and her pets. She tended and nurtured a beautiful yard, filled with thriving azaleas, many types of flowers, and her prize tomatoes. She also found joy in mowing her own lawn, which she stubbornly did well into her 90's. For the dogs that were lucky enough to be in Elsie's care, they were loved more than most. Elsie Mae is survived by her three daughters Connie Decker (Steve), Maria Cobb, and Juanita Thompson; six grandchildren Antonio Cobb, Russell Cobb, Dr. Shane Cobb (Jennifer), Lisa Thompson, Mark Thompson, Jr (Ashley), and Anna Thompson; and five great grandchildren Russell Cobb, Noah Cobb, Christina Cobb, Charlotte Thompson, and Madeleine Thompson. In addition to her parents and husband, she was predeceased by her six siblings, two son-in-laws, and one great grandson. Elsie Mae's visitation will be held on Thursday December 9th from 6-8pm at Forbis and Dick funeral home located at 1118 N. Elm St, Greensboro NC 27401. A funeral mass will be held on Friday December 10th at 1:30pm at Our Lady of Grace Catholic Church located at 2203 W. Market St, Greensboro NC 27403. Father Casey Coleman will be offering the mass. Internment will follow the funeral mass at Lakeview Memorial Park located at 3600 N. Ohenry Blvd, Greensboro NC 27405. The family would like to thank Authora Care hospice for their care for Elsie Mae in her end of life transition.

Elsie Mae Bowes Alomia, age 94, of Greensboro went home to be with the Lord on Friday December 3, 2021. Elsie Mae was born on March 31st, 1927 in Caswell County, North Carolina. She was the daugther of the late John Willie Bowes and the... View Obituary & Service Information

The family of Elsie B. Alomia created this Life Tributes page to make it easy to share your memories.

Send flowers to the Alomia family.