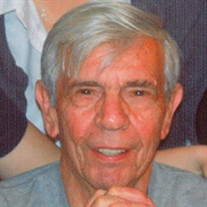 MOCKSVILLE - Mr. Edward John Scherlacher, Sr. 89, of Charleston Ridge Drive, died Monday, September 6, 2021, at his home. He was born on August 21, 1932, in Newark, NJ to the late Alexsandor Carl and Margarit Maria Hanisch Scherlacher. Ed’s first language was German, and he learned English in kindergarten. He completed elementary school as valedictorian of his eighth-grade class. As he progressed in his education, he excelled in athletics and academics. He received recognition in basketball and football. Ed’s achievements in baseball landed him a scholarship at Bloomfield College. After college, he entered the U.S. Naval Reserves. He was drafted and sent to Guantanamo Bay, Cuba, where he played for the baseball team on Base. He then earned a spot on the All-Star team. On July 4, 1954, his team went up against the Cuban All-Star team, and won. Ed enjoyed a career as a sales manager with Anaconda American Brass and Cambridge Lee Industries. He had a flair for using golf outings and deep-sea fishing excursions to build relationships with customers. He was a gifted Tiffany-style glass artisan, woodworker and craftsman. His entire life he loved his workbench where it seemed he could fix or make anything. He deeply cared and loved Gerrie, his wife of 66 years, with whom he raised three sons. He is fondly remembered for making delicious homemade pizza on Saturday nights with the family. Vacationing on the Jersey Shore each summer was time Ed was able to truly slow down and relax. So many wonderful memories on Long Beach Island. Ed was a lifelong sportsman and president of the local Little League Association in East Hanover, NJ. He always supported local sports teams. He was a proud life-long NY Yankees baseball and NY Giants football fan. Playing golf was his lifelong passion. He hit a hole in one in a tournament in 1971. Ed was a deeply committed Christian who enjoyed 28 years of service as the 5th and 6th-grade boys Sunday School teacher at the Calvary Evangelical Free Church in Essex Fells, NJ. Upon his retirement to Mocksville, NC in 2002, he and his wife Gerrie ministered at The Billy Graham Library in Charlotte for 11 years. He was a member of Blaise Baptist Church. In addition to her parents, he was preceded in death by a brother, Carl Scherlacher. Survivors include his wife, Gerrie Wilma Kincs Scherlacher of the home; three children, Edward John Scherlacher, Jr. of Atlanta, GA, Andrew James Scherlacher (Beth) of Greensboro and Christopher David Scherlacher (Niemah) of Milton, NJ; eight grandchildren; ten great-grandchildren; a niece, Susan Zelenenki; and two nephews, Carl Scherlacher and John Scherlacher. A private inurnment will take place in Blaise Baptist Church Cemetery with military honors conducted by the U.S. Navy. A memorial service will be conducted at 4 p.m. Saturday, October 9, at Blaise Baptist Church, with Rev. Ken Furches officiating. The family will receive friends immediately following the service. In lieu of flowers, memorials may be considered for Billy Graham Library, 4330 Westmont Drive, Charlotte, NC 28217. Online condolences may be made at www.eatonfuneralservice.com.

The family of Edward John Scherlacher Sr. created this Life Tributes page to make it easy to share your memories.

Send flowers to the Scherlacher family.