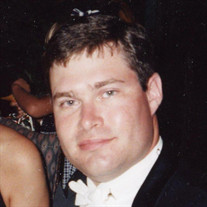 Edward “Alex” Clendon passed away at home after bravely fighting a long illness contracted from flu shot complications. He was 50. Alex grew up in Summerfield, went to high school at Northwest Guilford and later returned to live there with his family. After graduating from Western Carolina University, he worked in sales and banking. But he finally found his calling in nursing and went back to school to get his degree at NC A&T. Afterwards, he worked at Thomasville Medical Center (now Novant Health Thomasville Medical Center) on the geriatric behavioral health floor. He is survived by the family he loved: his wife, Charla Clendon; sons: Logan and Reece (of Boone, NC); and daughter, Peyton (at home). He is also survived by his mother, Ann Clendon; sister, Courtney Sparrow; her husband, Jason (Isaac & Miles); and best friend, Robert Rapp III. He is preceded in death by his father, George W. Clendon, Jr. Since he was a child, Alex was a diehard Clemson sports fan. He watched them play at every turn and provided colorful commentary along the way. His favorite sport was soccer which he played growing up and in high school. He loved watching his kids compete at the sport and was a very proud and passionate parent, giving the referees advice on their officiating whenever applicable. His favorite team was Chelsea Football Club and was thrilled to cheer them on in-person during one of his last trips out of the country. Alex enjoyed traveling, and his favorite place to be was on the beach. He traveled to the Caribbean many times, scouting the perfect place to retire. Before he became ill, he was able to find that ideal spot in St. John, USVI. And even though he knew he would not see the beach again, he longed for the day he could dip his toes again in the warm, blue waters surrounded by his family. Alex, we hope you are enjoying that beautiful beach now. A private, family service will be held Monday, October 4, 2021. In lieu of flowers, please donate to Doberman Rescue of the Triad - an organization near and dear to Alex, R O. Box 13979, Greensboro, NC 27415.

Edward &#8220;Alex&#8221; Clendon passed away at home after bravely fighting a long illness contracted from flu shot complications. He was 50. Alex grew up in Summerfield, went to high school at Northwest Guilford and later returned to live... View Obituary & Service Information

The family of Edward Alexander "Alex" Clendon created this Life Tributes page to make it easy to share your memories.

Edward “Alex” Clendon passed away at home after bravely fighting...

Send flowers to the Clendon family.