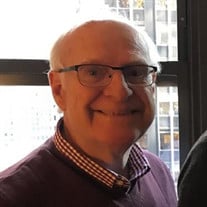 Edward William (Ed) Allred, age 80, died at home on Wednesday, 17 November after a brief illness. He was a Greensboro native, a well-respected educator and principal in the Greensboro/Guilford County school system and a much-loved church musician and leader in local churches for many years. Ed was born on 17 May 1941 to Colon L. Allred and Mae Frances Black Allred, both natives of Randolph County, North Carolina. After graduation from Greensboro/Grimsley High School, he attended and graduated from Trevecca Nazarene College in Nashville, TN, in 1964 with a Bachelor’s degree, double majoring in Elementary Education and Music. While at Trevecca, he met and married Martha Anet Godby and they went on to enjoy 59 years of marriage. Ed and Martha were blessed with one son, Edward William (Bill) Allred, II, who has followed in his father’s footsteps as a church musician. Over the years, Ed enjoyed learning and completed coursework towards a doctorate in education and earned a diaconal ministry degree in the United Methodist Church (UMC). He held teaching positions at Joyner and General Greene Elementary Schools and Mendenhall Junior High, and served as principal at Peeler, Claxton, Joyner, Jones and Hunter Elementary Schools. All through the years, he was part-time minister of music at Rolling Roads Church of the Nazarene, then at White Rock Church of the Nazarene, and Mount Pisgah UMC, all in Greensboro. Following retirement from education, he took on a full-time position as church musician and diaconal minister at Mount Pisgah UMC. After retiring from 30 years at Mount Pisgah UMC, he became part-time minister of congregational care and senior adult ministry at Mount Pleasant UMC of McLeansville. Ed was preceded in death by his parents, Colon L. Allred and Mae Frances Black Allred. He is survived by his wife Martha, his son Bill and his son’s wife Alicia. Ed will be interred in the columbarium at Mount Pisgah UMC in Greensboro in a private family service. A memorial service will be Conducted 1:30 pm Saturday December 11, 2021 at Mt Pleasant United Methodist Church. The family will receive friends before and immediately following the service in the church sanctuary. The family asks that you wear masks for safety. If you wish, you are invited to send any donation to the Ernestine L. Penry Foundation c/o Mount Pisgah United Methodist Church.

Edward William (Ed) Allred, age 80, died at home on Wednesday, 17 November after a brief illness. He was a Greensboro native, a well-respected educator and principal in the Greensboro/Guilford County school system and a much-loved church musician... View Obituary & Service Information

The family of Edward William Allred created this Life Tributes page to make it easy to share your memories.

Send flowers to the Allred family.