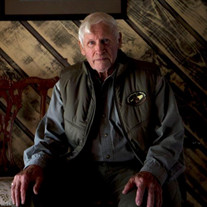 Eddie C. Bridges A Legendary Conservationist! Eddie C. Bridges, age 87, of Greensboro, completed his earthly journey on May 18th, 2021 and moved on to higher ground. He was born on June 5,1933 in Morganton NC (Burke County), the son of Plato Durham Bridges and Iva Singleton Bridges, both now deceased. He graduated from Morganton High School in 1953, where he was an outstanding athlete, playing football and baseball. He served as captain of both sports, earned all conference and all state recognition and played in the 1953 Optimist Bowl. He attended Elon College (Now Elon University), where he continued to excel in sports. He played both Football and ran track and field. He especially excelled at track, were he was the first person in Elon history to run the 100 yard dash under 10 seconds, with a time of 9.8 seconds. In a single meet, he established three new school records in the 100 and 200-yard dashes and a leg of the mile relay. In 2003, he was honored by Elon University with the Distinguished Alums Award. Eddie's entire adult life was dedicated to wildlife conservation work. He was appointed to the North Carolina Wildlife Resources Commission in 1977, where he served two, six-year terms. During that time, he proposed and helped develop the North Carolina Lifetime Hunting and Fishing Licenses and the North Carolina Wildlife Endowment Fund (also named the Eddie Bridges Fund by the North Carolina General Assembly). The Wildlife Endowment Fund currently totals over $164 million and will continue to support North Carolina’s wildlife resources for future generations. He also proposed the North Carolina Waterfowl Stamp and the North Carolina Tax Check Off program - two initiatives that continue today and raise funds for wildlife conservation. When Eddie completed his two terms on the NCWRC in 1989, he created the North Carolina Wildlife Habitat Foundation, which is modeled after the endowment fund and generates money to help improve wildlife habitat all across North Carolina. He received more than 40 wildlife conservation awards, including the Budweiser Conservationist of the year in 2004, the Field & Stream Conservationist of the year in 2012, the Governor's Award from the North Carolina Wildlife Federation in 1993 and was inducted into their Hall of Fame. He was inducted into the Guilford County Sports Hall of Fame in 2011. He was also awarded by NCWRC, the Order of the Long Leaf Pine, the state's highest honor, in 2013. He was inducted into the North Carolina Sports Hall of Fame in 2019, as the first Hunting, Angler, and Conservation Sportsman. Eddie stated, "Divine Order has taken care of a lot of stuff for me," and "The Lord has blessed me in a multitude of ways. Lots of great things have happened to me. I feel really honored and grateful, and to be 87 years old and still getting those nice blessings is pretty remarkable." He is survived by his children, Samuel Edward Bridges (Leisa); Lisa Bridges; Michelle Bridges Sharpe (Allen); sister Jane Fowler (Bill); of Asheville; seven grandchildren, Melissa Johnson; Lily Jo, Eddison, Ivy and Stone Bridges; Sterling and Hudson Sharpe. A celebration of life service will be held at the Grandover Resort on Wednesday, June 23, from 3 to 5 p.m. For Room reservation rate is $139.00 (Bridges Celebration) Please RSVP by email to: [email protected] You may send memorable photos of Eddie or a message to the family. In lieu of flowers, memorial contributions may be made to NCWHF (Eddie C. Bridges Legacy Memorial), P.O. BOX 29187, Greensboro, NC 27429 or the Sid Varney Scholarship at Elon University.

Eddie C. Bridges A Legendary Conservationist! Eddie C. Bridges, age 87, of Greensboro, completed his earthly journey on May 18th, 2021 and moved on to higher ground. He was born on June 5,1933 in Morganton NC (Burke County), the son of Plato... View Obituary & Service Information

The family of Eddie C. Bridges created this Life Tributes page to make it easy to share your memories.

Send flowers to the Bridges family.