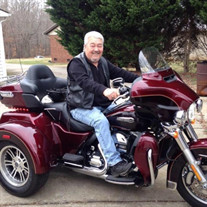 Mr. Earl Davis Chaney, Sr., 77, passed away on Tuesday morning, October 12, 2021 at Countryside Manor. The family will hold a private memorial service due to the current pandemic with hopes of a gathering for friends and family at a later date. Earl was born in Rockingham County on February 9, 1944 the son of the late Zack James Chaney and Nora Lee Bullins Chaney. He was retired from the City of Greensboro and owned and operated C & C Concrete Company. In his spare time he could be found riding his Harley. He enjoyed western movies, too, but most importantly, time spent with his family, children and grandchildren was his treasure on earth. Earl never met a stranger and will be sorely missed by all who knew and loved him. In addition to his parents, he was preceded in death by 2 sons David Chaney and Earl D. Chaney, Jr and his brothers and sisters. Surviving are his wife of 56 years, Betty B. Chaney of the home; children Ray Chaney and wife, Simone of Greensboro, Jackie Chaney of the home, Tabitha Whitmore and husband, Brian of Oak Ridge, Sheryl Martin and husband, Dale of Stokesdale; 4 grandchildren Megan Chaney (Neal), Brittany Taylor (Josh), Skylar Martin (Katelyn), and Cassie Martin (Josh); 5 great grandchildren Teryn, Lillie, Raelyn, Jaxson, and Jameson. Special words of appreciation are extended to the folks at Countryside Manor for their dedication and loyalty in caring for Earl during his short stay there. In lieu of flowers, memorial donations may be made to St. Jude Children’s Research Hospital, 501 St. Jude Place, Memphis, TN 38105. Earl’s favorite expression was “ If you can’t be good, be good at it!. I love you all” Forbis & Dick – Stokesdale is serving the Chaney family and you are invited to share memories or offer condolences at www.forbisanddick.com.

Mr. Earl Davis Chaney, Sr., 77, passed away on Tuesday morning, October 12, 2021 at Countryside Manor. The family will hold a private memorial service due to the current pandemic with hopes of a gathering for friends and family at a later date. Earl... View Obituary & Service Information

The family of Earl Davis Chaney Sr. created this Life Tributes page to make it easy to share your memories.

Send flowers to the Chaney family.