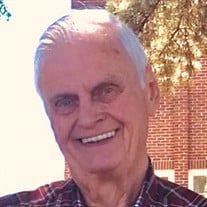 Duane A. Youngdahl, 85, passed away Sunday April 25, 2021 in Greensboro. There will be a Memorial service at Christ Lutheran Church on Sunday, May 2, 2021 at 2:00 pm. Duane was born on June 22, 1935 in Austin, Minnesota to the late Einar and Hilma Youngdahl. He is a graduate of Luther College, Decorah, IA and The University of Colorado, Boulder and is an Air Force Veteran. He became a Certified Public Accountant and worked in a number of different industries over a long career in various finance positions. This required a number of moves and living in several different states early in his career. With the move to Greensboro in 1971 he put down his roots, found his home, and became a long time member of Christ Lutheran Church. The most important thing to him was his family and he strived to leave the world a better place for them. Duane is survived by his beloved wife of more than 63 years, Beata Youngdahl and his children, David Youngdahl (Rhonda), Jeffrey Youngdahl (Belinda), Craig Youngdahl (Beth) and Michael Youngdahl (Bobbi). Survivors also include grandchildren; Bradley Youngdahl, Kelly Hukill, Kristi Pearson (Barry), Kevin Marksberry (Amy), Lizabeth Bouldin (Don), Lindsay Youngdahl, Caleb Youngdahl and Christian Youngdahl. Great-grandchildren Cassie Charvat (Patrick), Noah Hanna, Kaden Marksberry, Madden Marksberry, Preston Hukill and Parker Hukill. He is also survived by a brother-in-law David Olson and many nieces and nephews. He is predeceased by his parents and twin sisters, Joyce Nelson and Joan Olson. In lieu of flowers, memorials can be made to Christ Lutheran Church, 3600 Lawndale Dr. Greensboro NC 27408 or Greensboro Urban Ministries, 305 W Gate City Blvd, Greensboro NC 27406. Forbis and Dick North Elm Chapel is assisting the Youngdahl family.

The family of Duane A. Youngdahl created this Life Tributes page to make it easy to share your memories.

Send flowers to the Youngdahl family.