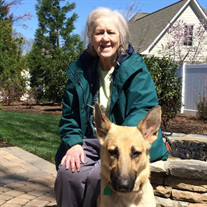 Dorothy Juliette Zaccardi Keeney, 88, passed away peacefully on August 15, 2021, in Greensboro, NC. Born to Oriente and Rosaria Zaccardi in Provo, UT, Dorothy attended public schools, Brigham Young University in Provo and Strayer’s Business College in Washington, D.C. She married William Patrick Keeney on June 8, 1955. They were married 60 years. Dorothy was employed by the Atomic Energy Commission (AEC) in Washington, D.C., and the Department of Energy in Idaho Falls, ID, and supported the United States’ efforts to achieve and sustain safe and effective nuclear capabilities. In the 1960s, Dorothy lived in Thurso, Scotland, where William was assigned by the AEC to advise the United Kingdom on Fast Nuclear Reactors. Both the Scots and Scotland held a special place in Dorothy’s heart as she made many ever-lasting friends with whom she communicated for more than 50 years. Classical music and playing her Steinway piano were favorite pastimes. She was proud of her Italian heritage and enjoyed many conversations with her parents of their early lives in Italy, discussing customs and relatives still there and tracing family heritage back to the 1500s. Dorothy loved animals and had many cats and dogs that she adopted. She was an active member of the Weaver’s Guild of Idaho Falls and enjoyed working with raw sheep’s wool. Dorothy wants to thank her medical team for the great care they provided: Drs. Hal Stoneking; Mark Skains; John Matthews; Christopher Groat; Christopher Dickson; K. Alex Poole II; the Drs. at Greensboro Radiology and Cone Hospital; and Michael Grodesky, Seattle. She feels her greatest achievement has been to be married to a kind, generous and caring man and raising two wonderful children. She thanks her children for the excellent care they provided to their father and her. Dorothy is preceded in death by her husband, her parents, brothers Julio, Ben and John and sisters Gloria Chatterley, Isabella Segna and Norma Zaccardi. Dorothy is survived by her children, AnaMarie Keeney, Seattle, WA; and Stephen Keeney, Greensboro; and Viva, the faithful family dog. The family would like to thank the staff of Hospice of the Piedmont and Father Casey Coleman, Our Lady of Grace Catholic Church, for the care they provided Dorothy in her last days. In lieu of flowers or other remembrances, please consider a donation to either of these organizations.

The family of Dorothy Juliette Zaccardi Keeney created this Life Tributes page to make it easy to share your memories.

Send flowers to the Keeney family.