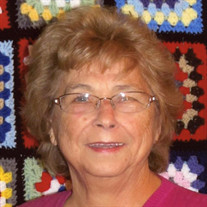 Dorothy Benton Floyd, 86, of Greensboro, North Carolina, passed away on April 27, 2021 at her home. She was born in Cayce, South Carolina on December 17, 1934, daughter of the late Sallie Marie Benton and Albert Ray Ellisor. She is proceeded in death by her brother, Felton Corbett Benton, sister, Von Dell Wise, husband, James Edward Floyd and daughter, Sandy Floyd Brown. She is survived by four children; Alicia Hendren (Lonnie Hendren), Daryl Floyd, Janice Cox (Kelly Cox), and Jodie Campbell (Jeff Campbell); her son in law Rick Brown; her grandchildren, Jamie Hendren (Tristia Hendren), Amanda York (Steven York), Daniel Brown (Morgan Gilbert), Jacob Brown, Billy Cox, Alana Engle, Gray Cox (Sarah Cox), and Chelsea Campbell; her great grandchildren, Kallie Hendren, Ryleigh Hendren, Justin Engle, Owen Engle, Ben Cox; her step great grandchildren, Spencer York, Dylan York and Connor York; and numerous relatives in South Carolina. Dorothy was a member of First Baptist Church of Cayce, South Carolina. Dorothy graduated from Brooklyn Cayce High School in 1952 and attended the University of South Carolina focusing on Pharmacology for two years until she married the love of her life, James in 1953. While living in Sycamore Acres, Dorothy and James raised four children in Columbia, South Carolina to later move to Charlotte, North Carolina for a short period. They moved to Greensboro, North Carolina as their final location in 1972 later having their fifth child. While living in Columbia, South Carolina, Dorothy and James met Kit and Doris Wilson who became lifelong friends. This friendship was her most treasured. Dorothy and Doris would always find adventure and laughter in everything they did together from shopping in Kmart to finding new areas of North Carolina to investigate. Beginning in 1978, Dorothy co-operated Triad Battery Co. and All Pro Auto Parts with her husband until 1989 where she be working as a teller at N.C.N.B. later known as Bank of America South Elm Street. Dorothy became known as “Nana” in 1980 which she claimed as one of her proudest moments. She moved to her final home 1998 near Burlington, North Carolina. Dorothy retired in 2004 only to begin volunteering at Alamance Regional Medical Center in Burlington, North Carolina. She also joined water aerobics classes twice a week and enjoyed all the friendships she made. She was delighted to attend as many academic, athletic, and social functions each grandchild had. Dorothy was a talented seamstress making a majority of every child’s clothing to include a wedding dress. She was extremely crafty and completed a lot of the handywork around each home. She enjoyed being the family photographer. Camping, crafts, sewing, reading, day trips to the Blue Ridge Parkway to admire the latest blooming of mountain laurel, traveling in general, and being around her family were just some of her favorite ways to experience life. A memorial service will be held Saturday, May 1, 2021 at Guilford College United Methodist Church, 1205 Fleming Rd, Greensboro, NC 27410. Visitation will begin at 10:00 a.m. with service following at 11:00 a.m. Masks or face coverings are required. If attending, please park in the Church’s Fellowship Hall parking lot. A private graveside service will be held in May. In lieu of flowers, donations can be made in memory of Dorothy B. Floyd to the American Heart Association, 7029 Albert Pick Rd #200, Greensboro, NC 27409 or to the American Cancer Society, 7027 Albert Pick Rd, Greensboro, NC 27409. The family especially acknowledges Dawn Wilson Rister for her love, laughter, and never-ending support during this journey. Thank you to Bailey, Mitzi, Caroline, Wendy, Terri, and Gail from AuthoraCare Collective Burlington Campus for the compassion and the dedicated care you displayed with each visit. Forbis and Dick Guilford Chapel is serving the Floyd family and online condolences may be offered at www.forbisanddick.com

Dorothy Benton Floyd, 86, of Greensboro, North Carolina, passed away on April 27, 2021 at her home. She was born in Cayce, South Carolina on December 17, 1934, daughter of the late Sallie Marie Benton and Albert Ray Ellisor. She is proceeded... View Obituary & Service Information

The family of Dorothy Benton Floyd created this Life Tributes page to make it easy to share your memories.

Send flowers to the Floyd family.