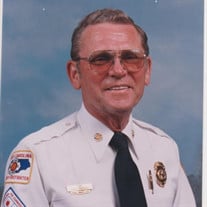 Donald Earl Whitaker, 87, a resident of Pleasant Garden passed away on Sunday February 13, 2022 at his home after a period of declining health. He was born February 11, 1935 in Glen Raven, the son of Earl W. and Maibelle Scoggins Whitaker. Donald served in the U.S. Air Force. After service he worked as a guard with the NC Department of Corrections at Central Prison in Raleigh before moving to Burlington to work with the Sunoco Corp. In 1963 he joined the Greensboro Fire Dept. and stayed until 1969 where he transferred to the city building inspections dept. and stayed until his 30 year retirement with the city of Greensboro ended. During his time with the city he was selected as a City Employee of the Year. Donald’s love for the fire department and his life in public service never ended. He was a founding member of the Level Cross Volunteer Fire Department where he served as Chief for 23 years; Acting Chief for the Pleasant Garden Fire Depart. for two years; Administrative Chief for the Climax Fire Dept. Relief Fund; serving for 24 years as the Treasurer of the NC Association of Fire Chief’s as well as serving as board member and president of several different fire associations. Even during all of this he was able to become a Master Mason and Shriner. He was a member of Centre Friends Meeting where he was a former choir member and served as head usher for many years. Always thinking fire or law enforcement, Donald was a collector of fire and law enforcement memorabilia for more than 50 years. In 2003 Donald and his wife Ethel built and opened to the public a building on their property to house his collection while still adding to the collection today. Donald, to see that structure that went from a building to “Donald’s Fire Haven Museum” is left intact for others to be able to visit and see has donated this massive collection to the Pleasant Garden Fire Dept. which has started a drive to build a structure to house “Donald’s Fire Haven Museum” for generations to follow to be able to visit. He was preceded in death by his parents and a brother, Gordon Lee Whitaker. Donald is survived by his wife of 59 years, Ethel Coltrane Whitaker of the home and his brother, Neil Whitaker of High Point Graveside services will be held at 11:00 a.m. Wednesday at Centre Friends Meeting House Cemetery with Reverend Rusty Parsons officiating. The family will receive friends following the service in the church fellowship hall. In lieu of flowers please consider making a memorial in Donald’s memory to Donald’s Fire Haven Museum c/o Pleasant Garden Fire Dept. 4814 Pleasant Garden Rd., PO Box 710 Pleasant Garden, NC 27313 Forbis & Dick, Pleasant Garden Chapel is serving the Family.

Donald Earl Whitaker, 87, a resident of Pleasant Garden passed away on Sunday February 13, 2022 at his home after a period of declining health. He was born February 11, 1935 in Glen Raven, the son of Earl W. and Maibelle Scoggins Whitaker. Donald... View Obituary & Service Information

The family of Donald Earl Whitaker created this Life Tributes page to make it easy to share your memories.

Send flowers to the Whitaker family.