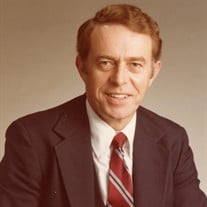 February 17,1932 - September 6, 2021, Greensboro, North Carolina - Dewey Leonard Trogdon, 89, of Greensboro, NC passed away peacefully, yet unexpectedly, on Monday, September 6, 2021. Dewey is survived by his wife, Barbara Ayers Trogdon; sons Mark Trogdon (Renee) of Raleigh, North Carolina, and Leonard Trogdon (Genesa) of Summerfield, North Carolina; four granddaughters - Elise, Lydia, Paige and Allie; brother Joe Trogdon (Carolyn) of Madison, NC and many nieces, nephews and cousins. He was preceded in death by his sisters Beverly Blankenship and Nancy McElrath. Dewey was born in his paternal grandparent’s farmhouse on Scalesville Road in Summerfield, NC as the oldest of four children to the late Dewey Sr. and Ethel Miller Trogdon on February 17,1932 during the Great Depression. He was a life-long member of Summerfield United Methodist Church, graduated from Summerfield High School, attended Navy Electrical School, and was a Navy veteran of the Korean War. Upon returning from the Korean War, Dewey married his wife of 66 years, Barbara Ayers Trogdon, and worked as a carpenter while attending Guilford College, graduating with a degree in Economics in 1958. Dewey completed additional study at The University of North Carolina at Chapel Hill Graduate School, and the executive programs of Harvard University and the Darden School at the University of Virginia. Dewey served as a member of the Guilford College Board of Trustees from 1980 - 2004 and has been a Trustee Emeritus since then. Dewey also served as a trustee of the Darden School at UVA and the NC State University Textile Foundation. After graduating from Guilford College, Dewey joined Cone Mills Corporation as an accountant in 1958 and rose through the ranks to eventually serve for 11 years as Cone Mill’s CEO and chairman before retiring in 1990. Dewey is a past president of American Textile Manufacturers Institute, past president and director of NC Textile Manufacturers Association and served as a longtime board member of the National Cotton Council. In addition, Dewey served as a director of Northwestern Bank and First Union Corporation. For many years Dewey served as a volunteer firefighter and assistant fire chief for the Summerfield Volunteer Fire Department providing needed help and care for people in the community at a time when emergency services in the area were scarce. During his years as a volunteer firefighter Dewey used his mechanical, electrical, and carpentry skills to help Fire Chief George Price build some of the original fire trucks and to design and build a new second station house. Dewey was also an avid historian of the town of Summerfield, NC as well as preserving photographs and history of the former Atlantic and Yadkin Railway. He enjoyed working to improve the old family farm site in Summerfield, spending time in the mountains, and working on his model trains. Most of all, Dewey enjoyed spending time surrounded by his family while telling stories of his life and experiences. The Trogdon family will receive friends and family on Sunday September 12, 2021 from 1-2:30 PM at Forbis & Dick N. Elm Chapel. A funeral service will follow the visitation. The service will be streamed on Facebook Live. Burial will be at Summerfield Peace United Methodist Church Cemetery at 4 pm. In lieu of flowers, please consider donating to Summerfield Peace United Methodist Church or to the charity of your choice. On the day and time of the service please click the link to view the Facebook live video. www.facebook.com/ForbisandDick/

The family of Dewey L. Trogdon created this Life Tributes page to make it easy to share your memories.

Send flowers to the Trogdon family.