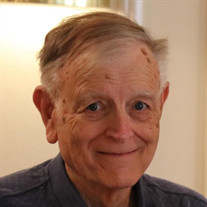 GREENSBORO - Dewey Collins Meeks, 76, passed away at Wesley Long Hospital in Greensboro, NC on February. 26, 2022. He was born on February 9, 1946 in Denison, Grayson Co., TX to Dewey Meeks and Mildred Elizabeth Bishop Meeks. He graduated from Denison High School in 1964 and received a BS in math from East Texas State University in Commerce, TX in 1968. After graduation, he worked for Shell Oil Company in Houston, TX from 1968 to 1991, as a programmer and mainframe Database Administrator. He and his wife Bonnie moved to Greensboro, NC in 1992 to be nearer Bonnie's aging parents and extended family. He contracted for several years, and retired in 2006 from Jefferson Pilot/Lincoln National Insurance in Greensboro. His passion was railroading, both 12" to the foot scale, and HO gauge. He volunteered for years at the Gulf Coast Chapter, NRHS in Houston, TX. Service to his community was very important to him wherever he lived. He served on the Planning Commission for Missouri City, TX and was on the board for his townhouse association. He volunteered in Houston through Shell's SERVE organization and participated in various Habitat for Humanity projects both in Houston and Greensboro. After moving to Greensboro, he volunteered at the NC Transportation Museum in Spencer, NC, and more recently at Greensboro Urban Ministry. It was at Shell Oil that he met Bonnie. Together always, they shared a love of travel, searching for treasures in antique malls, and RVing. They took the RV on many excursions to Colorado, Utah, and other states, always fitting in train rides whenever possible. An RV caravan to the Canadian Maritimes was another shared adventure. By RVing, they were able to take their beloved cats Devan & Lacey with them on their adventures. Another interest Dewey shared with Bonnie was genealogy. He worked on his own family history for over 30 years. He was a member and past president of Guilford County Genealogical Society, and also a Find-A-Grave contributor and an indexer for Family Search. Even after his move from Houston, he continued to be a major supporter of the Clayton Library for Genealogical Research as a member of Clayton Library Friends. Friendships really mattered to Dewey. He stayed in touch with many Shell friends as well as childhood friends, even though they are scattered around the country. He was predeceased by his parents. He is survived by his loving wife of 30 years, Bonnie Early Meeks, brother-in-law Larry (Marian) Early of New York state, cousins Marie Maguire of New Jersey, Jann Walton of Texas and other cousins. Also surviving are his very dear friends of many years Bill & Betty Dixon of Nebraska and Bill & Celia Hoard of Arkansas. No services are planned at this time. In lieu of flowers, contributions may be made to Gulf Coast Chapter, National Railway Historical Society of Houston, TX, Greensboro Urban Ministry, or a charity of your choice. Forbis and Dick Guilford Chapel is serving the family.

GREENSBORO - Dewey Collins Meeks, 76, passed away at Wesley Long Hospital in Greensboro, NC on February. 26, 2022. He was born on February 9, 1946 in Denison, Grayson Co., TX to Dewey Meeks and Mildred Elizabeth Bishop Meeks. He graduated from... View Obituary & Service Information

The family of Dewey Collins Meeks created this Life Tributes page to make it easy to share your memories.

Send flowers to the Meeks family.