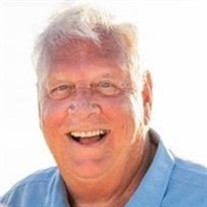 It is with a heavy, but grateful heart that we announce the passing of David Steven Murphy of Greensboro, NC on Sunday October 10th, 2021, at the youthful age of 68 after a 13-year battle with cancer. David was born November 16, 1952, in Greensboro, NC to Kermit and Jean Murphy. This was only the beginning of the wonderful life that David would have. He attended Page High School, where he met his high school sweetheart and future best wife ever, Jane Land, outside the gym in 1967 during their sophomore year. He graduated in 1970 and went on to play basketball at Wofford College for four years and graduated in 1974 with a Psychology major. David and Jane married shortly after college on September 11, 1976, with a festive color theme to commemorate the bicentennial year. David and Jane recently celebrated their 45th wedding anniversary and both of them were eagerly looking forward to the next one with the same love and affection for one another as the day they met. A couple of years after being married David and Jane moved to Texas to help grow a family business and to start a family of their own. In 1996, David and Jane moved their family back to Greensboro, North Carolina, where he spent the last chapters of his life. David lived a life full of adventure and had a personality that you could not forget, it was infectious to say the least. He and Jane loved to travel from the very beginning and throughout their story. The Montreal Olympics in 1976, “Blue Canoe” rafting trips, Europe, and remote tropical locales before they were popular destinations just to name a few. David loved being surrounded by family and friends and you could always find a smile on his face, a drink in his hand and if photos were involved, some “bunny ears. ”Speaking of family and friends, they can attest to the humor and larger than life attitude that he always had. He worked hard both personally and professionally, he mentored many, loved more and he was rewarded throughout life with successes in both. David took pride in the company he kept and his relationships with family and friends that he cherished most. He had a positive impact on everyone he met, and his spirit will carry on through them and through countless positive touches he has made throughout a lifetime. He truly had a life worth celebrating. David is survived by his wife, Jane Murphy and their three sons, David Murphy II (Kendall), Morgan Murphy (Kim), and Hunter Murphy. He was lovingly known as PopPop to his five grandchildren, Hank, Andrew, Wesley, Bennett, and Hazel Grace. He leaves behind his siblings, Judy Worsley (John), Gary Murphy (Ann), Janet Murphy (Gregg), Leigh Yost, and an abundance of nieces and nephews and his stepmother Arlene Murphy. He was preceded in death by his parents, Kermit and Jean, and his brother, Kermit (Kit) Murphy II.As Big Dave would always say, “Happy Trails.” A service will be held at 10am on Friday, November 5th at West Market United Methodist Church in Greensboro, NC. "In lieu of flowers", memorial contributions can be made to Core Sound Waterfowl Museum & Heritage Center or a charity of your choice.

It is with a heavy, but grateful heart that we announce the passing of David Steven Murphy of Greensboro, NC on Sunday October 10th, 2021, at the youthful age of 68 after a 13-year battle with cancer. David was born November 16, 1952, in Greensboro,... View Obituary & Service Information

The family of David Steven Murphy created this Life Tributes page to make it easy to share your memories.

It is with a heavy, but grateful heart that we announce the passing...

Send flowers to the Murphy family.