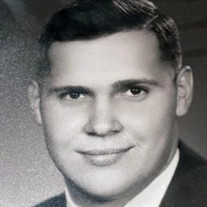 GREENSBORO, NC - David C. Kolls, 92, died January 18, 2022, in Greensboro, North Carolina. David Kolls was born in Racine, Wisconsin, May 9, 1929 to Clifton and Edna Kolls. His nickname was "Big Dave." It really measured his love, kindness and gentle nature far more than his physical stature. For Dave, life was always family first. And that started when he met a shy, Italian-Danish girl named Nancy Aiello at McKinley Junior High School. Dave had a romantic switch he just couldn't turn off and used his alley-cat charm to convince Nancy to be his gal at Washington Park High School where they dated through graduation, 1947. Two years later, in 1949, Dave and Nancy married at Atonement Lutheran Church and continued their love story for the next 72 years, a total of 75 years together when you count three years of courtship. Dave would send love notes, letters, and flowers to Nancy, without missing a month throughout their marriage, solidifying his place in history as "Racine's Romeo." A classic love affair which brought a daughter and two sons into the family. Karla Hansen, Les Kolls and Jay Kolls. Dave started his livelihood as a third-shift foundry worker at Belle City Malleable, which later became Racine Steel Castings. As a child of the depression-era, his dream was to achieve a college degree which he did in his early 40's and then furthered by earning a master's degree with the staunch support and help of Nancy. He retired after 42 years at Racine Steel ending his career as a sales manager. Dave and Nancy then did what all good Sconnies do, they retired "up North" to Door County. Dave enjoyed the Packers, Brewers, Bucks, Badgers, Duke University, camping and fishing. The Duke thing we don't understand, but we forgive him because we are forever thankful he made us Packer Backers. Dave never met a plate of food he didn't like but steak, pork chops, Wells Brothers Pizza, salami, sardines, herring and, of course, cheese were on high on his list with either a gin martini, beer or wine. See, the man knew how to enjoy life. Dave was quiet but when he spoke you listened to him. One of his favorite quips was "I figured out a long time ago you cannot learn much, if your lips are always moving." He gave forever love to his family, friends, and strangers. That love and devotion runs through those who follow in his wonderful light as he is survived by wife, Nancy; three children; 11 grandchildren and nine great-grandchildren. He is preceded in death by his father and mother: Clifton and Edna Kolls; his sister, Lois Olsen and his son-in-law, Michael "Mick" Hansen. The family has requested memorials be directed to the American Cancer Society.

The family of Mr. David Clifton Kolls created this Life Tributes page to make it easy to share your memories.

Send flowers to the Kolls family.