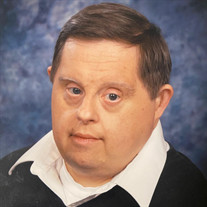 On May 4, 2021, David Bartlett Clapp, 65 of Greensboro, NC, departed for his heavenly home. Born on June 16, 1955 in Pittsburgh, PA, David was the second of three children of Harry and Patricia Clapp. David spent his whole life exceeding expectations. A confirmed member of Calvary Lutheran Church in Wilkinsburg, PA, David spent many years serving as an acolyte. He was active in Boy Scouts and achieved the rank of 1St class. He also had a neighborhood paper route. After graduating from Eastern Area School in Churchill, PA, he continued taking classes at Allegheny Community College to expand his skill set. David moved with his parents to McLean, VA in 1979, and took classes at Northern Virginia Community College while working and commuting to several jobs. An active member of Andrew Chapel United Methodist Church, David enjoyed participating in all church activities. He was a member of a bowling league and served on several self-advocacy groups for those with special needs. He worked for the Fairfax County Recreation Department for several years. David’s parents retired with him to Greensboro, NC in 1991 where he continued his working career with positions at Food Lion, Hobby Lobby, Weatherspoon Museum, and Twin Lakes Memory Center. He then worked as a chef at ArcBARKS, a company founded by his mother for individuals with special needs. David was featured on several TV shows and in newspaper articles. David had many hobbies and interests. He loved to bowl, was a talented painter, participated in Special Olympics and was a singer with the Inner Rhythm Choir who performed all over the state of North Carolina. David is survived by his parents, Harry and Patricia Clapp of the home, brother Jeffrey (Lynn) Clapp of Pittsburgh, PA, sister Jean Clapp Groome (Tim) of High Point, NC, nephew Brian (Barbie) Clapp and great-niece Samantha of Austin, TX, niece Megan Clapp of Pittsburgh, PA, special caretaker cousin William Mitchell Causey III of Randleman, NC, aunt Esther Clapp Livengood Irby of Burlington, NC and 29 first cousins across the country. The family would like to thank his longtime caregiver, Felecia Gilmer for all of her love and dedication to David over her many years with the family. Likewise to LaTosha Irving for providing loving companionship and healthcare in his recent years. You both made a difference in his life. And finally, the family would also like to express their gratitude to Authoracare/Hospice of Greensboro for their devotion to David and his care in his final months. Arrangements are being attended to by Forbis & Dick Funeral Service. Visitation, service and burial will be held at Mt. Pleasant United Methodist Church at 5120 Burlington Rd in Greensboro on Monday, May 10. Visitation will begin at 2:00 with the service at 3:00 and burial to follow. In lieu of flowers, the family asks that donations be made to Authoracare/Hospice of Greensboro at 2500 Summit Ave. Greensboro, NC 27405 or to a local community group serving those with special needs.

On May 4, 2021, David Bartlett Clapp, 65 of Greensboro, NC, departed for his heavenly home. Born on June 16, 1955 in Pittsburgh, PA, David was the second of three children of Harry and Patricia Clapp. David spent his whole life exceeding... View Obituary & Service Information

The family of David Bartlett Clapp created this Life Tributes page to make it easy to share your memories.