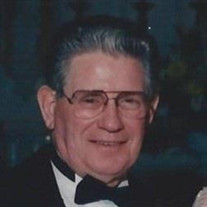 On June 10, 2021, David E. Bohannon, “Mr. Bo,” passed away, while under the care of Beacon Place at AuthoraCare, Greensboro, NC. David was 97 years old and had lived a long and loving life. His life was devoted to the Sacred Heart of Jesus and The Blessed Mother of God. David is preceded in death by his first wife, Dorothy C. (McCarron), and his second wife of 52 years, Helen J. (Fenton) Bohannon; his beloved grandson Cooper Jaxon Lowe; his brothers Phillip, William H. and John J.; his sisters Gloria R. Wilson, Eleanor T. Pace, and Mary Lou McCardle; and his son-in-law Edward Cearley. David is survived by his son David Bohannon, daughters Dorothy Ann (Bohannon) Sheridan, Ellen (Panepinto) DiGennaro and husband Michael, Toni (Panepinto) Cearley, Jacqueline (Bohannon) Lowe and husband Grant, of the home; his grandchildren Connor Kennedy Lowe, of the home, David, William, Jill, Bridget, Tom, Christopher, Sarah, and David; his brothers Robert C. and Gerald A.; and by his great-grandchildren, cousins, nieces, and nephews. David was born at Germantown Hospital in Philadelphia, PA, on April 5, 1924. He was the fourth of nine children born to Charles A. Bohannon and Noretta K. (Sheehan) Bohannon. He graduated high school from West Philadelphia Catholic School for Boys in 1942. He entered the US Navy Air Corp. on October 28, 1942, and served as a bow gunner and aviation ordinance man, 3rd Class. During WWII he was a member of Patrol Squad VPB-215 and flew anti-submarine missions in the North Atlantic Ocean. He was honorably discharged on February 15, 1946. David played American Legion Baseball and was a player/manager of the Blackenberg-Brennan American Legion Post 876 team in the semi-pro Penn-Del League. He played football for West Catholic and Kingsessing Shamrocks Pop Warner 175 lb. football team of West Philadelphia. David was a co-captain for 3 of his 6-year career and named Pop Warner’s Sportsman of the Year in 1942. David was an avid Philadelphia Phillies and Flyers fan and a season ticket holder for the Philadelphia Eagles at Veterans Stadium. Up until his death he owned a seat license and season ticket to the Carolina Panthers. David’s civilian work began as a laborer at Oscar Mayer in Philadelphia, retiring 22.5 years later as Department Supervisor. He was then employed by Mrs. Paul’s, of Philadelphia, as an Assistant Plant Manager and later Corporate Quality Control Director. The Campbell Soup Company bought Mrs. Paul’s in 1972 and David was named Plant Manager of a new Philadelphia plant. His successes were many including the Presidential Award for outstanding service from both Mrs. Paul’s in 1970 and the Campbell Soup Company in 1988. He retired from Campbell Soup in 1989 after 40 years of service in the food industry. In 1964 David married the widowed Helen J. Fenton, and along with her daughters, Ellen and Antoinette, the new family moved to Magnolia, NJ. Together they had a daughter, Jacqueline in 1965. David and Helen lived on Pasadena Drive in Magnolia, NJ for over 25 years. During those years countless family and neighborhood parties were held at home. David, along with his wife Helen, volunteered many hours over many years for Catalina Hills Little League as a coach and past president of the league. David and Helen also volunteered many hours at Glendora Girls’ Athletic League, in Glendora, NJ, where he was instrumental in the purchase of land and the design and development of playing fields and facilities at Glover Field Sports Complex on Evesham Road. While doing so, David became Chairman of Gloucester Township Parks and Recreation Council. Helen and David were also very active in St. Gregory’s Roman Catholic Church, in Magnolia, NJ, where David was a member and past president of the Parish Council. He was also an active parishioner in Immaculate Heart of Mary Catholic Church, in High Point, NC. Special thanks to nurses and staff of AuthoraCare who made the last few months of his life comfortable. A Mass of Christian celebration will take place at Immaculate Heart of Mary Catholic Church at a later date. Donations in David’s memory can be made to High Point Friends School, Immaculate Heart of Mary Catholic Church, Glendora Girls’ Athletic League, and Beacon Place at AuthoraCare, Greensboro, NC. Online condolences may be shared at www.forbisanddick.com.

On June 10, 2021, David E. Bohannon, &#8220;Mr. Bo,&#8221; passed away, while under the care of Beacon Place at AuthoraCare, Greensboro, NC. David was 97 years old and had lived a long and loving life. His life was devoted to the Sacred Heart... View Obituary & Service Information

The family of David E. Bohannon created this Life Tributes page to make it easy to share your memories.

Send flowers to the Bohannon family.