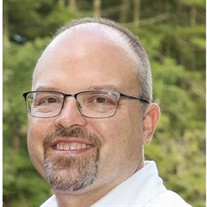 Daniel Lawrence “Trey” Rock III GREENSBORO - Daniel Lawrence “Trey” Rock III, passed away peacefully, in his sleep, on December 29, 2021, after an 18-month, valiant battle with brain cancer. He was 55. Trey was born on April 15, 1966, in Lake Charles, LA, to Larry and Pat Rock Jr. He graduated in 1984, from Pittsford Mendon High School, in Pittsford, NY, where he was a 3-sport letterman in football, lacrosse and cross-country skiing. After high school Trey attended Guilford College for 2 years and then SUNY Binghamton, graduating in 1988 with a B.A. in European History. At both schools he was involved in the arts; musical theatre and singing in chorus and barbershop quartet. Following graduation, Trey earned his teaching certificate, from SUNY Cortland, and taught at Lincoln Middle School, in Greensboro, NC. After teaching, he enlisted in the US Naval reserves and was deployed for active duty on the USS San Jose during the Persian Gulf War. He primarily worked crash and salvage on the flight deck of his aircraft carrier. He was honorably discharged and received a National Defense Service Medal, Southwest Asia Service Medal with Bronze Star, and Sea Service Deployment Ribbon. Following his military service, Trey spent 20 years in management/supervisory positions in support departments at NationsBank, and AT&T Wireless. He led by example and was well-known and respected by his representatives and peers for his unflappable patience, positivity, and integrity. Trey strongly believed in stewardship. He spent time volunteering with Owen and Noah at Out of the Garden Project. He also was a volunteer for many of the kids’ activities. He was a rec soccer and flag-football coach and also a swim official for the Greensboro Community Swim Association and USA Swimming. He also served on several non-profit boards in the community. He was a board member of Hamilton Lakes Swim & Tennis Club for five years, chairman for three. He was also currently serving on the board of the Bryan YMCA. This Spring several members donated a banner in Trey’s honor for all his work with the swim team and the Bryan YMCA. When Trey pursued his hobbies and interests, he did so with a passion. He was a huge sports fan. Whether he was cheering on a PGA player or NFL or NCAA team, especially the Houston Oilers turned Tennessee Titans, or the UNC Tar Heels, he did it with gusto. Trey liked to cook and created many delicious Cajun dishes while watching sports. He loved music, and after college learned to play guitar, and compose songs. He surprised Jennifer with a song at their rehearsal dinner. Trey also loved woodworking and over the years built several pieces of furniture and other items for their home. About 15 years ago, he developed an interest in guitar building. In 2013, he resigned his position at AT&T Wireless, and attended guitar luthier school for eight weeks in Atlanta. When he returned, he opened a guitar luthier hobby business and became a stay-at-home dad. He since crafted and sold several beautiful guitars and charcuterie boards. Fatherhood, though, is the role that truly fulfilled Trey. Whether it was cooking hot breakfasts, conversations while driving to school or activities, or advice or help with a project, he cherished it all. Anyone who knew him knew he considered his family his greatest accomplishment. Trey is survived by his devoted wife of 23 years, Jennifer, their sons Owen and Noah, his parents Larry and Pat, sister Kristin Johnson (David), nieces Madison, Kaitlyn, and Camille Johnson, great niece Amaya Lovejoy, and countless aunts, uncles, cousins, and in-laws. Trey was predeceased by his nephews Caleb and Hayden Johnson. A memorial service will be held at 11:00 a.m. on Friday, May 20, 2022 at St. Pius X Catholic Church, 2210 N. Elm Street, Greensboro, NC 27408 in Greensboro, NC. A Celebration of Life honoring Trey will be that evening from 7-10 p.m. at Elm & Bain Event Venue, 620B S. Elm Street, in Downtown Greensboro. Memorial contributions can be made to Out of the Garden Project, P.O. Box 4331, Greensboro, NC, 27404 or at www.OutoftheGardenProject.org/donate Forbis and Dick Guilford Chapel is serving the family.

The family of Daniel Lawrence "Trey" Rock III created this Life Tributes page to make it easy to share your memories.

Send flowers to the Rock family.