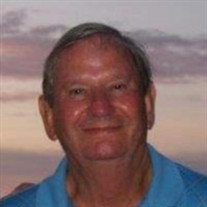 Daniel Allen Nicks, 83, of Greensboro, passed away Tuesday, April 26, 2022 at Moses Cone Hospital. Daniel was born in Altamahaw-Ossipee, North Carolina, as the middle son of Glenn and Pauline Nicks. He grew up on the banks of the Haw River and on the Troxler homestead of his maternal grandparents. He graduated from A-O High School in 1957, and attended 2 years of college at Western Carolina University. After he married his childhood sweetheart, Rebecca Jones, in 1960, he went to work for Beech-Nut Baby Foods and later moved to Greensboro to raise his family and work for JP Stevens Textile Company. Working his way up to management over a career that spanned 30 years with JP Stevens, he continued working at the Timken Company in Randleman until his retirement at 70. He is predeceased by his parents, A. Glenn Nicks and Pauline Troxler Nicks and is survived by his wife, Rebecca Jones Nicks, and his 2 children, Elizabeth Nursey (Roger), and Mitchell Nicks. He is also survived by grandchildren, Craig Nursey, Eric Nursey, and Michelle Nursey McClarnon (Peter), as well as Dylan Nicks and Olivia Nicks. He was a wonderful great-grandfather to Amelia and Tyler Nursey. He's also survived by his siblings, Joseph Nicks and Sarah Nicks Poythress of Burlington. He loved coffee by the pot, the NC State Wolfpack, ACC football and basketball (and would take 2 vacation days on Thursday and Friday during the ACC Tourney every year), and playing golf after learning how to hit a ball in the pastures next to the house he grew up in. He could eat grilled ribs by the dozen, crab legs by the bushel, and fried seafood until he was the only one left at the table. But, most of all, he loved his family and could always be counted on to help whenever it was needed, whether it was sick children in the middle of the night, a flat tire, or a lost house key. Whatever was needed, he was there and we will always be thankful that we had him in our life. The family will receive friends on Saturday, May 7, 2022 from 2:00pm until 4:00pm at Forbis & Dick Guilford Chapel, 5926 W. Friendly Ave., Greensboro, NC 27410.

Daniel Allen Nicks, 83, of Greensboro, passed away Tuesday, April 26, 2022 at Moses Cone Hospital. Daniel was born in Altamahaw-Ossipee, North Carolina, as the middle son of Glenn and Pauline Nicks. He grew up on the banks of the Haw River and... View Obituary & Service Information

The family of Daniel Allen Nicks created this Life Tributes page to make it easy to share your memories.

Send flowers to the Nicks family.