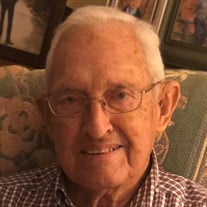 Cothran “Cotty” Dwight Wall, passed away peacefully and went to be with our Lord Jesus Christ on April 9th, 2021. He was born in Greensboro, North Carolina on January 20th, 1927 to the late Doss Winchester Wall & Laura Odell Wall and lived in his hometown for his entire life. The middle of five children, Cotty remained close to his family throughout his life. A World War II veteran of the United States Navy, Cotty served proudly as a Seabee while stationed in Okinawa. Upon returning from service, he began working at Southern Webbing Mills where he would work for the next fifty years, retiring as Vice President of Manufacturing. On August 18th, 1948 Cotty married Doris Young and enjoyed life together with her for the next 72 years until his passing. Through those years, Cotty devoted himself to his wife and their family, providing for them in everyway possible. He is survived by his wife, his sons Dwight Wall and wife Jill, Steven Wall and his wife Cecille; grandchildren Stephanie and Justin Carter, David and Caitlin Wall, Brandon and Kasey Wall, and Tyler Wall; and one great grandson William Carter. Passing before him in addition to his parents were his son David Michael Wall, his siblings William “Billy” Wall, James “Pete” Wall, Catherine “Lady” Sherwin, and Sue Cunningham. Cotty was a longtime member of Lawndale Baptist Church and a celebration of life will take place there on Tuesday, April 13th at 12PM. The family will receive friends from 11:00AM-11:45AM before the service in the church parlor. Intermant will follow the Service at Lakeview Memorial Park. Memorial contributions may be made to Baptist Children’s Homes of NC, 204 Idol St, Thomasville, NC 27360 and Lawndale Baptist Church, 3505 Lawndale Dr, Greensboro, NC 27408.

Cothran &#8220;Cotty&#8221; Dwight Wall, passed away peacefully and went to be with our Lord Jesus Christ on April 9th, 2021. He was born in Greensboro, North Carolina on January 20th, 1927 to the late Doss Winchester Wall & Laura Odell Wall... View Obituary & Service Information

The family of Cothran Dwight Wall created this Life Tributes page to make it easy to share your memories.

Send flowers to the Wall family.