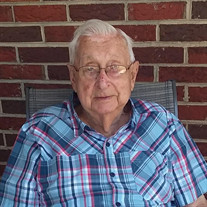 Cletis E. Richard, 93, passed away Thursday, August 12, 2021 at Moses Cone Hospital in Greensboro, NC. The family will receive friends Tuesday, August 17, 2021 from 1:00 – 2:30 pm at Forbis and Dick Guilford Chapel, 5926 W. Friendly Ave., Greensboro, NC 27410. A graveside service will follow at Forest Lawn Cemetery. Cletis was born in Roanoke, VA on April 5, 1928 to the late Clarence Richard and his wife, Eunice Board Richard. He graduated from Check High School in VA and proudly served his country in the U.S. Navy. He worked as a painting contractor and was a member of P.D.C.A, the Elks Club, and Guilford College United Methodist Church where he held several positions in the church. His hobbies included playing golf, yardwork, and he especially loved playing golf with his grandsons. After retirement, he loved traveling in his motor home. In addition to his parents, he was preceded in death by his wife of 63 years, Betsy; his son, Darryl Richard; and his brother, Warren Richard. Survivors include his son, David Richard (Amelia); his daughter, Barbara Coble (Mark); grandsons, Brandon Richard (Tiffani), Jason Coble (Rebecca), and Matthew Coble; and 4 great-grandchildren, Logan, Holden, Aaron, and Eliza. In lieu of flowers, memorial contributions may be given to Guilford College United Methodist Church, 1205 Fleming Rd., Greensboro, NC 27410. Forbis and Dick Guilford Chapel is serving the family and online condolences may be offered at www.forbisanddick.com.

The family of Cletis E. Richard created this Life Tributes page to make it easy to share your memories.

Send flowers to the Richard family.