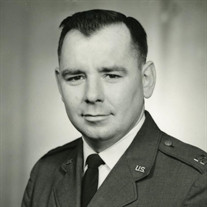 Charles ”Charlie” Ott Jr. died Jan 8, 2022 in Greensboro. An accomplished painter and outdoorsman, Dad was a loving husband and father with a passion for many things. He was known and loved for his wit, optimism, frankness and candor and always spoke what was on his mind, never holding a grudge and was always cheerful and forgiving. He never let life’s stumbles and missteps dampen his personality and always had a positive outlook on life. Born in Elmira, NY on January 24, 1929, Charlie was the son of Charles H. Ott, MD and Leona K. Ott and had an older sister Judy O. Browne. He attended Elmira Free Academy and graduated in 1947. From there, he attended Bucknell University, joining the Military in 1950. While in the Air Force, he was able to attend and graduate from the University of Nebraska with a degree in American History. Dad’s life adventures began when he enlisted in the United States Air Force in 1950. He served his country proudly and with honor and would never back down from any disparaging remarks or comments involving the U.S. Military. His assignments allowed him to travel the globe while raising a family. Upon enlisting, he was assigned to Spokane, WA then to Topeka, KS. He was then transferred to Alaska and from there to Montgomery, AL. In Montgomery, he attended officer candidate school where he met and married Susie. Susie and Charlie then transferred to California. Subsequently, he and his growing family were sent to Morocco, Nebraska, New York and onto Wiesbaden, Germany where they lived and traveled extensively for 4 years. During the Vietnam war, he was sent to Thailand and then reassigned to Washington, DC where in 1970, he retired as a Major with honors. Upon leaving the military, he and the family moved to Greensboro where he spent 20 years with the IRS. One of his favorite stories was when he was stationed in Alaska and while fishing for Grayling, he was chased by a black bear which he ultimately shot and killed. He then had it shipped back to his home in Elmira where his father had the bear’s head mounted. “Smokey” still hangs on his wall along with a variety of other wildlife including trout, pheasant, a wild boar’s head referred to as “Wilbur” and a trophy winning Red Deer (European elk) rack. Charlie had a wide variety of hobbies and interests. He was an accomplished oil painter, hunter and fisherman. He had a sense of adventure and a love for all things outdoors. His other passions included airplanes, traveling, camping, gardening and skiing in both the Europe and North America. He loved his Mini Coopers, his dogs and spending time at his pool with family and friends. He was preceded in death by his loving wife of 30 years, Betty Sue “Susie” Johnson Ott. To cherish his memory, Charlie leaves behind sons Chuck (Judy) of McLeansville, NC, Albert (Julie) of Wilmington, NC, Stuart (Kim) of Kernersville, NC, grandchildren Nikki (Ed) of Charlotte,NC, Steven (Jordan) of Burlington, NC, Alex of Houston, TX, Corey of Raleigh,NC, Sydney of Wilmington, NC, Zachary of Highlands, NC and Leslie of McLeansville, NC. Charlie was also blessed with 5 great grandchildren. He will be missed by all. There will be a memorial service at Forbis and Dick Funeral Home on West Friendly Avenue in Greensboro on Thursday, Jan 13, 11 am. Burial will follow at Westminster Gardens in Greensboro, NC. In lieu of flowers, the family requests donations be made to the Audubon Society or the Nature Conservancy. Forbis and Dick Guilford Chapel is serving the family.

Charles &#8221;Charlie&#8221; Ott Jr. died Jan 8, 2022 in Greensboro. An accomplished painter and outdoorsman, Dad was a loving husband and father with a passion for many things. He was known and loved for his wit, optimism, frankness and... View Obituary & Service Information

The family of Charles Henry Ott Jr. created this Life Tributes page to make it easy to share your memories.

Send flowers to the Ott family.