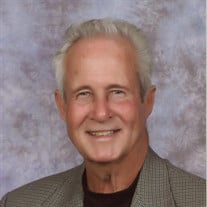 Charles Ray Mobley, 89, of Greensboro, NC, peacefully passed away Friday, December 3rd. A visitation for family and friends will be held on Tuesday, December 7th at 1:00pm at Guilford Baptist Church, 5904 West Market Street, Greensboro, NC 27409. A memorial service will follow. In lieu of flowers, memorials may be made to Guilford Baptist Church. Charles was born on September 22nd, 1932 in Gastonia, NC to Ray and Hazel Mobley. On January 14th, 1951 he married his high school sweetheart, Frances (Bunt) Mobley. They were married for seventy years and have two sons, five grandchildren, and six great grandchildren. Charles started his career with Plantation Pipeline in 1952. An opportunity with Plantation brought his family to Greensboro in 1964. Later that year, he left Plantation to pursue a career at Colonial Pipeline. In 1995 Charles retired from Colonial, leaving with fond memories and friends. During his retirement, Charles and Frances enjoyed traveling. They went on many camping adventures and also found a love for bus tours, going on several during their retirement days. Charles enjoyed playing golf and horseshoes. He was an athlete growing up, excelling in many sports. He played on the All-State high school baseball team and on a Semi-pro baseball team, played on the high school football team, and was a Golden Glove boxing champ for three years in high school. Charles was known for his incredible laugh; you knew he was in the room before you saw him. Charles is survived by his devoted wife, Frances, two sons, Chuck & Ronnie, two daughters-in-law, Debbie & Joyce, and five grandchildren and their spouses, Kristi Mueller (Frank Mueller), Stephanie Briggs (Jason Briggs), Angie Fletcher (Matt Fletcher), Brian Mobley, and Kevin Mobley. His six great-grandchildren are Kaylee and Tyler Briggs, Bryson and Ansley Fletcher, and Kenedie and Karsyn Mobley.

The family of Charles Ray Mobley created this Life Tributes page to make it easy to share your memories.

Send flowers to the Mobley family.