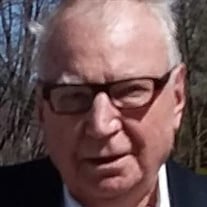 Charles Lee Foust, Sr. passed peacefully in his sleep at the Greensboro home of his son William ‘Lucky’ Foust on Tuesday, January 18th. Memorial services will be held in the spring of the year at Ashelawn Memorial Chapel & Gardens in Jefferson NC. Charles was preceded in death by his parents; Kinny Lee Foust and Mary Ellen Gordon Foust, sister; Virginia Dare Foust, half-brother; Kinney Lee ‘Johnny’ Foust, Jr. stepmother; Alma Stone Foust. His loving wife, Cora Lee Belle Nelson Foust passed from a stroke on August 30, 2017 – the very day of their 65th wedding anniversary. His grandson, Jason Lee Foust passed in 2000, and his eldest son, Charles Lee Foust, Jr. (Ann) died in a tragic car accident in February of 2019. He is survived by siblings; half-brother, Denny Ross Foust and half-sister, Judy Lorraine Beck (Delbert). Children; William Nelson ‘Lucky’ Foust (Chris) and Rocky Eugene Foust (Trish). Grandchildren; Joel Christopher Foust, William Lloyd Foust, Heather Kelley Foust, Amber Rose Moore and Jesse Lee Foust. Step grandchildren; Holly Adell Yuva, Kyle McGhehey, Forrest Neal Sizemore, Grant Tyler Sizemore. He was also survived by numerous great grandchildren, nieces, nephews, and in-laws. Charles was born August 20, 1932, in Midway NC, the son of Kinney Lee Foust and Mary Ellen Gordon. His mother passed when Charles was only two years old from tuberculosis leaving Charles to be raised mostly by his grandparents, Bill & Gertie Foust and their eleven children. Although technically they were his aunts and uncles they grew to became more like brothers and sisters to him. Charles left home and school to begin working at the age of eleven. At the age of fifteen he joined the U.S. Army. He began in the infantry and was sent to Japan for training. From Japan he was sent to fight in the Korean War. He spent more than a year of heavy combat before returning to the states. When he was reassigned to an artillery unit he vowed “no more infantry.” He soon made corporal while stationed at Ft. Bragg. While on leave he stopped in Winston Salem to visit his Aunt Dot. She was renting out a room to a young college student attending Draughn’s Business College -- Lee Belle Nelson from Ashe County. Lee Belle answered the door and Charles’ life was changed forever. They married on August 30, 1952, in Winston Salem and the newlyweds first lived at Ft. Bragg. Corporal Foust received extensive training at Ft. Bragg and Ft. Sill OK and attained the rank of Sergeant (NCO). In May of 1954, his first son, Charles Lee Jr. was born at Ft. Bragg. In the fall of 1954 Charles was transferred to one of the first rocket units of the U.S. Army. He was deployed to Ansbach Germany where his wife Lee took up residence in the base housing in 1955. In 1956 William Nelson ‘Lucky’ was born and in 1957 Rocky Eugene was born – both at the U.S. Army hospital in Nurnberg Germany. Returning to the states, the family moved with Charles to his new assignment in Ft. Sill OK. The family spent their free time camping, fishing, and boating. This became a passion for Charles that continued throughout his life. Sergeant Foust was sent back to Korea in 1959 with an artillery unit, then sent to Ft. Lewis WA with the NIKE missile unit. In 1962 he was one of only eighteen senior NCO’s to be chosen to be a part of a special Vietnam military intelligence program initiated by President Kennedy. After he received extensive training and preparation, he was sent to Vietnam on special assignment. As the Vietnam War progressed, he requested and received Civilian Component Duty. He was assigned stateside to a Kentucky National Guard unit. When he had accumulated twenty years of service he chose to retire from the army. He and the family had moved during his service between the states of Georgia, North Carolina, Washington, Oklahoma, and Kentucky. He attained the rank of Master Sergeant (E8) and received numerous military accolades, honors, and awards including being named an honorary Kentucky Colonel for his service during the Louisville riots. After retiring from the U.S. Army, he had a long and productive career in management with Square D Company and Leviton. Much of his success in life was due to his ability to lead people and fix things. He was fond of his shop and spent much of his time repairing or building things. He was able to build or repair about anything from small engines to autos to farm implements. He was competent in carpentry, electrical, woodworking, welding, and fabricating. Charles and Lee even laid block for their two-car garage with overhead shop on the Ashe County farm. He was ‘the guy’ that many in the community went to when something broke or would not run. Charles and Lee’s home was always open to visitors, friends and neighbors. They both loved gardening and at one time had more than 200 varieties of trees, shrubs and plants surrounding their Ashe County mountain home. They were blessed to live on this farm from 1977 to 2000 when they retired to a farm next to their eldest son, Chuck in Oxford OH until 2019. He became known as Pa Foust and was usually found in the garden wearing a dirty white V-neck t-shirt with a shovel or hoe in his hand. Lee was usually found somewhere around the farm planting, watering, or nurturing beautiful plants and flowers. In addition, their passion for cooking was passed on to their three boys and to this day nobody ever goes hungry in a Foust house. As Charles was an avid gun collector, marksman, and animal lover, memorial contributions in lieu of flowers may be made to the NRA Foundation, 11250 Waples Mill Rd, Fairfax, VA 22030 www.nrafoundation.org or to the Humane Society of the Piedmont, 4527 West Wendover Ave. Greensboro NC 27409 www.hspiedmont.org.

Charles Lee Foust, Sr. passed peacefully in his sleep at the Greensboro home of his son William &#8216;Lucky&#8217; Foust on Tuesday, January 18th. Memorial services will be held in the spring of the year at Ashelawn Memorial Chapel & Gardens... View Obituary & Service Information

The family of Charles Lee Foust Sr created this Life Tributes page to make it easy to share your memories.

Charles Lee Foust, Sr. passed peacefully in his sleep at the...

Send flowers to the Foust family.