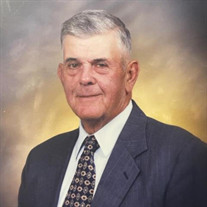 Charles “Marvin” Clapp, 88, of Greensboro, NC passed away December 26, 2021 at his residence. A visitation with the family will be held in the Mount Pleasant Church Fellowship Center (5120 Burlington Road Greensboro, NC, 27405) on Sunday, January 2, 2022 from 4-6 pm. The funeral service will be held in the Sanctuary of Mount Pleasant Church on Monday, January 3, 2022 at 2:00 p.m. with a graveside service in the Mount Pleasant Church Cemetery to follow. It is requested that Covid precautions be observed including social distancing. Marvin was born in Greensboro, NC to Charlie G. and Cora M. Clapp. He grew up in the McLeansville community and graduated from McLeansville High School. Marvin was raised on the family farm with his older sister Elizabeth Ann, younger brother David and younger sister Dorothy. He married the love of his life, Sylvia Fryar. Marvin and Sylvia had two sons, Alan, and Andy. They were devoted parents and grandparents, providing love, nurture, and cultivation just like the crops on the farm. Marvin was a lifelong farmer and volunteer fireman with the McLeansville Fire Department. He served for many years on the Board of Directors for the McLeansville Fire Department and spent 47 years as the Board Treasurer. Marvin and David were selected as Outstanding Guilford County Farm Family of the Year in 2000. Marvin was predeceased by his wife, Sylvia; parents, Charlie, and Cora Clapp; sisters, Elizabeth Ann Norris, and Dorothy Guffey; brother-in-law, Eddie Norris and a nephew, Greg Norris. He is survived by sons, Alan (Amy) Clapp and Andy (Lisa) Clapp; grandchildren, Drew, Alana, Heath, Spencer, and Gwyneth; brother, David (Emily) and brother-in-law, Woody Fryar (Jean). Also surviving is a multitude of nieces and nephews. Memorial contributions in lieu of flowers can be made to Mount Pleasant United Methodist Church and earmarked for the Sylvia Clapp Mission Endowment Fund. Online condolences may be made at www.forbisanddick.com. Forbis and Dick North Elm Chapel is serving the Clapp family.

The family of Charles Marvin Clapp created this Life Tributes page to make it easy to share your memories.