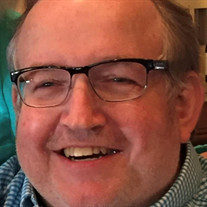 Charles “Chuck” Joseph Cannell passed away on Wednesday, March 16, at his home in Greensboro. He was born on October, 19, 1957, in St. Charles, Missouri, to the late Charles Harold and Jo Anne Elder Cannell. Chuck is survived by his loving wife and best friend of more than 39 years, Ann; sons John (Jenifer) and Joseph; daughter JoAnne; three grandchildren; one great-grandchild; brothers David (Margaret) and Bill (Jennifer); a nephew and niece; an aunt; and many cousins. Chuck grew up in the Midwest and Pennsylvania before moving to Greensboro in the 1970s. He graduated from Western Guilford High School and UNC-Greensboro. Being an avid volunteer and substitute teacher at his daughter’s school led to him becoming the treasurer at Northeast Guilford Middle School, where he spent the last 20 years. Prior to that, he worked for Wachovia Bank. He was fortunate to have made so many friends and enjoyed keeping in touch with them. Chuck had a wonderful sense of humor and never met a stranger. He loved to put a smile on your face. It was rare for him to be somewhere and not run into someone he knew. He had many interests but especially loved music, reading, and cooking. Chuck had a talent for baking and was known for his pound cakes. Later in his life, he developed a surprising affection for cats, especially one named Hermione, whom he rescued from under the hood of his car. She became his close companion, and they loved spending time together. A Celebration of Life will be held on Saturday, April 2, from 2 to 4 p.m. at Northeast Guilford Middle School, 6720 McLeansville Rd., McLeansville, N.C. 27301. Everyone is welcome to attend. In lieu of flowers, please consider donating to the SPCA of the Triad, 3163 Hines Chapel Rd., Greensboro, N.C. 27405.

Charles &#8220;Chuck&#8221; Joseph Cannell passed away on Wednesday, March 16, at his home in Greensboro. He was born on October, 19, 1957, in St. Charles, Missouri, to the late Charles Harold and Jo Anne Elder Cannell. Chuck is survived by... View Obituary & Service Information

The family of Charles "Chuck" Joseph Cannell created this Life Tributes page to make it easy to share your memories.

Send flowers to the Cannell family.