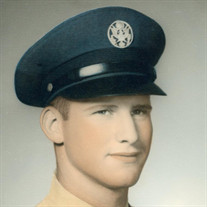 Charles William Buck of Greensboro, NC passed away Sunday January 16, 2022, at Pennybyrn in High Point. “Buck,” as he was lovingly known by friends and family, was born August 1, 1936, in Newark, NJ. He moved to Danville, VA when he was 6 years old. He graduated from George Washington High School, where he met the love of his life, Marie. He joined the USAF in 1958 and spent two tours in Vietnam as well as other tours. After 20 years of service to his country he retired in Lubbock, Texas. Buck then worked for Methodist Hospital from 1978 to 1985. Shortly afterwards, he and his wife, Marie moved to Greensboro in 1986 where he worked for Charter Hospital until he retired. Buck gathered friends wherever he went, and his family, friends and home were his greatest joys. He was happiest spending time with his beloved cats, enjoying books, music, and movies. He was also a sport enthusiast having been on the football and wrestling teams in high school. Additionally, he played on the softball team while in the Air force. He was a Yankee and Notre Dame fan for life. He leaves his cherished, beloved wife and best friend of 64 years, Marie Shumate Buck; two sons Anthony D. Buck and wife, Sandi of Archdale, NC and Timothy R. Buck and wife, Marcie of Vero Beach, FL; three grandchildren, one great-grandson, and a brother, Richard L. Buck and wife, Maureen. A 2:00 p.m. memorial service will be at Forbis and Dick North Elm Chapel, 1118 N. Elm Street in Greensboro on Monday, January 24, 2022. Due to Covid, visitation will be deferred to online condolences and may be offered at www.forbisanddick.com. Memorial donations may be sent to Veterans of Foreign War, 917 New Bern Avenue, Raleigh, NC, 27601, Tunnels to Towers Foundation, 2361 Hylan Boulevard, Staten Island, NY 10306, or SPCA of the Triad, 3163 Hines Chapel Road, Greensboro, NC, 27405.

The family of Charles William Buck created this Life Tributes page to make it easy to share your memories.

Send flowers to the Buck family.