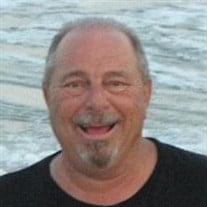 GREENSBORO - Charles “Charlie” Herman Bell, 80, of Greensboro NC gained his wings on November 22, 2021. Charlie was born in 1941 in Baltimore, Maryland. He joined the Marines in 1964 until 1966. He took an enormous amount of pride in being a Marine! He worked for Gamse Lithographing in Baltimore, Maryland after leaving the Marine Corp. He worked there until 1979 when he moved his family to North Carolina to work for Western Roto Engravers where he was a Regional Sales Manager until he retired at the age of 76. He truly loved what he did!! Charlie loved golfing, traveling, watching Andy Griffith, Thanksgiving, Christmas and cooking! He was a real foodie and was a wonderful cook. The true joy in his life was 3 children and his 6 grandchildren (which anyone who knew him knows them as his 6 monkeys)! No matter the activity, he was their biggest supporter and always there to cheer them on. He had a huge heart. He was quick to smile and had a contagious belly laugh. He was larger than life and he loved even bigger. If you asked him how he was doing he always said, “I’m blessed”. The family of Charlie would like to thank Brookdale at Lawndale for loving him through a difficult time. They would also like to thank Dr. Gene Freeman and Alicia Parker of the Cone Health Palliative Care Team. Your care and compassion are unsurpassed. Charlie was preceded in death by his parents, Virginia and Gilbert Kesler and his beloved wife, Carolyn Bell. He is survived by his daughters, Karen Hinson (Jim Hinson) their children Matthew, Abigail, Rebekah and Benjamin of Greensboro; Denise Bell Aldridge (Gary Aldridge) and their children Samantha and Olivia of Greensboro and Michael Bell of Washington, DC and sister Diana Alexander of Littleton, Colorado. A Celebration of Life Service will be held on Sunday, November 28th at 3:00 p.m. at Oak Ridge United Methodist Church, 2424 Oak Ridge Road, Oak Ridge, NC 27310. In lieu of flowers donations to Charlie’s favorite charity, St. Jude Children’s Hospital (262 Danny Thomas Place, Memphis, TN 38105) would be greatly appreciated. Forbis and Dick Guilford Chapel is serving the family.

The family of Charles "Charlie" Herman Bell Jr. created this Life Tributes page to make it easy to share your memories.

Send flowers to the Bell family.