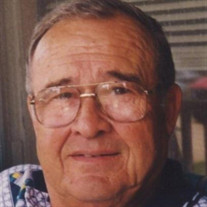 Bryce Millard Greeson, 88, went home to be with the Lord on Sunday, March 14, 2021, at Beacon Place. Bryce was a native of Guilford County. He was the son of the late Albert Grady Greeson, Sr. and Iola Poole Greeson. He is preceded in death by his brother, A.G. Greeson, Jr. He leaves his beloved wife of 65 years, Patsy Davis Greeson, his brother Jack William Greeson of Florida, his children: Steve Greeson (wife Mary) of Clemmons, Jane Cato (husband John) of Charlotte, Stanley Greeson (fiancée Alison Falls) of Greensboro, Kim Greeson of Greensboro. Grandchildren, Jakob Stevenson, Emily Greeson and Micah Greeson. Bryce graduated from Alamance High School where he was a star basketball player, bus driver (before he even had a driver's license) and was voted best looking in his senior class. He was honored for never missing a day of school in all 12 years. Most importantly, this is where he met the love of his life, Patsy Davis. After graduation, he served 4 years in the United States Coast Guard. In 1988, he retired as the Assistant General Manager of Dillard Paper Company, after 32 years of service to follow his dream of living at the coast. Many will remember Bryce for his love of fishing, playing golf, and the Atlanta Braves. His children will remember him for so much more. The annual family beach trip to Topsail Island in June, after the children got out of school was a family favorite. This is where he instilled his love of the sound of the ocean, the warm salty air, and the sand and surf to his children. His love for his wife was immeasurable. Because of his health issues, in 2010 he and Pat moved back to Greensboro after living in Morehead City for 22 years. He wanted Pat to be closer to their children in case something happened to him. When Pat went to Clapp’s Nursing Center in 2012 his love and devotion to her only increased. He would visit her everyday and take her chocolates, magazines and the daily newspaper. When his health started to decline in 2019 and he could no longer drive, his children would take him for visits. Due to Covid restrictions, he spent the last year missing and worrying about her. When he spoke his last words to his children, he told them they were the best children, how he did everything he knew to raise them right and that he loved them. He told them to tell Pat that he doubled loved her and that she was the best. With his declining health, he waited on this earth as long as he possibly could, waiting for her to die first, so he could finally be with her. “Don't worry dad, we are going to take care of mom, until you can be with her again”. The family would like to recognize the wonderful care Bryce received from all his dedicated caregivers especially Ms. Gail Gray along with Maura Barber & the staff of AuthoraCare Hospice. And a special thank you to Lori Gerhardt and Danielle Gonzales at CHMG HeartCare. A graveside service will be held Saturday March 20, at Alamance Presbyterian Church at 1:00 P.M, 4000 Presbyterian Road. Greensboro N.C. 27406. In lieu of flowers, those who wish may make memorial gifts to the charity of their choice or AuthoraCare Collective Hospice, 2500 Summit Avenue, Greensboro, NC 27405 Forbis & Dick Pleasant Garden Chapel is serving the Greeson Family. Online condolences may be offered at www.forbisandddick.com.

Bryce Millard Greeson, 88, went home to be with the Lord on Sunday, March 14, 2021, at Beacon Place. Bryce was a native of Guilford County. He was the son of the late Albert Grady Greeson, Sr. and Iola Poole Greeson. He is preceded in death... View Obituary & Service Information

The family of Bryce Millard Greeson created this Life Tributes page to make it easy to share your memories.

Bryce Millard Greeson, 88, went home to be with the Lord on Sunday,...

Send flowers to the Greeson family.