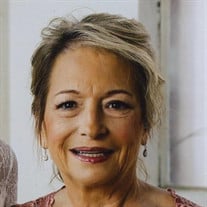 Brenda Kay (Wells) Hall, 67, passed away peacefully at home in Greensboro, North Carolina, on June 20, 2022 after a long hard fought battle with ALS. She was born in Vinita, Oklahoma to Billy Eugene Wells Sr., and Mary Frances (Hull) Wells. She was a 2007 Graduate of North Carolina Agricultural and Technical State University with a bachelor’s in science in Nursing. Brenda married Donald Ray Hall on March 17, 1994, who preceded her in death. She was a retired Nurse for Moses Cone Hospital, a career she loved and was devoted to. She was awarded the distinction of the Top 100 Nurses in North Carolina after her retirement by nomination of her esteemed peers and colleagues. Surviving family includes her daughters, Amy Barker and husband John Barker of Wynne, Arkansas, Jamie Somers and husband Todd Somers of Greensboro, North Carolina and Amanda Grace Hall of Greensboro, North Carolina; Grandchildren Zoe Ennis, Jarret Alexander, Zane Barker, and Tate Somers. Nephews Chad Wells, Trevor Wells, and Dusty Livingston. Several Great Nieces and Nephews. Family was always the center of the Hall home. A special thanks to Ryan and Maria Brazel for always showing us that family is self-defined. Preceding her in death were husband, parents, and infant brother Johnny Lee Wells, Brother Billy Eugene Wells Jr., and Sister Mary Ann Livingston. What a joyous homecoming it will be! The funeral service will be held Saturday June 25, 2022, at 2 pm at Forbis & Dick Pleasant Garden, with Pastor Ted Williams officiating. The family will receive friends immediately following the service. In lieu of flowers, donations may be made to the ALS association, NC Chapter and Team Gleason. The family would like to thank the ALS clinic at Duke University hospital, Specifically Dr. Richard Bedlack, for the exceptional care she received.

The family of Brenda Kay Hall created this Life Tributes page to make it easy to share your memories.

Brenda Kay (Wells) Hall, 67, passed away peacefully at home in...

Send flowers to the Hall family.