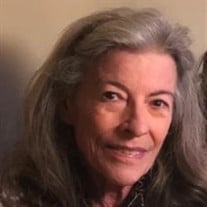 Bonnie McGee, 75, died on May 25, 2021 while surrounded by her family at home. She was born to the late Albert and Maria Van Montfrans on July 24, 1945 in Washington DC. Shortly after her birth, her family moved to Aruba, where Bonnie spent her childhood. Bonnie made the decision to attend Lees-McRae College and moved to Banner Elk, NC in 1964 where she met her soulmate and husband, Donald Lee McGee, Jr. Bonnie and Don were married and moved to Winston Salem, NC where they had their only child, Michelle McGee Rothrock. After her father’s death in 1979, her mother “Ria” immigrated to the United States in 1996 where she died in 2006. Her youngest brother, Butch Van Montfrans of Cardwell, Queensland Australia passed away in 2007. Bonnie is survived by her devoted and dedicated husband, Donald Lee McGee, Jr., her daughter and best friend, Michelle McGee Rothrock; two loving grandchildren, Grayson and Mallory Rothrock and her loving brother Jacques Van Montfrans , sister-in-law Elizabeth Wilkins and nephew and niece Schuyler and Clare. Bonnie had an innate love of nature and the water and always had the ability to find the good in every situation. She retired from the City of Greensboro in 2009. She was the matriarch of a small but very intertwined, close-knit family of five. She has forever left her imprint on each of our hearts, souls, and in this world through her kindness, life lessons, and devotion. Her spirit will live on through us and she will be missed immensely. We are thankful that when she was carried home, we were able to be by her side. A private celebration of life will be held at a later date and her ashes will be taken back to Aruba by her family. A special thank you to Hospice of the Piedmont who was with Bonnie and her family every step of the way. Donations in her memory may be made to Hospice at 1801 Westchester Drive, High Point NC, 27262. Forbis and Dick Guilford Chapel is serving the family and online condolences may be offered at www.forbisanddick.com

Bonnie McGee, 75, died on May 25, 2021 while surrounded by her family at home. She was born to the late Albert and Maria Van Montfrans on July 24, 1945 in Washington DC. Shortly after her birth, her family moved to Aruba, where Bonnie spent... View Obituary & Service Information

The family of Bonnie B. McGee created this Life Tributes page to make it easy to share your memories.

Send flowers to the McGee family.