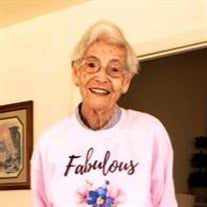 Beulah Chestnut Marvin, 100, passed away on Monday, March 28, 2022, at her home in Countryside Village. A memorial service will be held at 2 p.m. on Sunday at Christ United Methodist Church in Greensboro. A native of Horry County, SC, Beulah was born on March 4, 1922, the daughter of the late William Benjamin and Grace Lewis Chestnut. She was a member of Christ United Methodist Church in Greensboro and Flat Rock United Methodist Church in Stokesdale. She was a very giving person, a loving mother, grandmother and wife. Her primary focus was on her home, family and friends. Beulah and her husband John enjoyed travels all around the world with the Elderhostel program. In later years, Beulah developed an enjoyment of using the iPad to entertain herself with puzzles and to keep in communication with family and friends. Beulah was an active resident of Countryside Retirement Community in Stokesdale. She was often seen walking in the neighborhood and visiting with neighbors. Her radiant smile was a gift to all who knew her. She was an active participant in Countryside activities especially the coffee club and exercise club. Beulah had a love for the beach, collecting shells, and cooking seafood. She was very creative and made dozens of beautiful Chrismons for her Christmas tree. Beulah has set an example, to all who knew her, as to how enjoyable and productive life can be as one advances in years. She was preceded in death by her parents, brothers Robert Chestnut, William Lloyd ‘Stick’ Chestnut and Bruce Chestnut, sister, Lomis Chestnut Colvin and daughter, Atalie Carol Marvin Watson. Surviving are her husband of 78 years, John Moore Marvin, son, William Roger ‘Bill’ Marvin of Winston Salem, grandchildren Alex Matthew Marvin, Ashley Marie Marvin and David William Watson, great grandchildren, Elijah Watson, Grace Watson and Hannah Watson, special friends Catchie and Steve Huntley, Sam and Sara Biffle and Hanna and Larry Johnson, as well as many nieces and nephews. Forbis & Dick – Stokesdale is serving the Marvin family.

Beulah Chestnut Marvin, 100, passed away on Monday, March 28, 2022, at her home in Countryside Village. A memorial service will be held at 2 p.m. on Sunday at Christ United Methodist Church in Greensboro. A native of Horry County, SC, Beulah... View Obituary & Service Information

The family of Beulah Chestnut Marvin created this Life Tributes page to make it easy to share your memories.

Send flowers to the Marvin family.