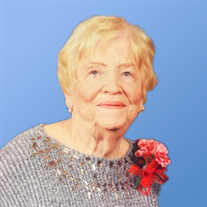 Betty Wood Jackson, formally of Wilmington, NC, died Monday, June 6, 2022 in Greensboro, NC. She was born in New Hanover County, North Carolina on June 15,1934, the daughter of the late Charlie W. Wood Sr. and Phebie R. Wood. Mrs. Jackson was retired from the Belk Company after many years of service. Mrs. Jackson was very active in church life, having served for more than thirty years as a Sunday School teacher in the children's department at First Baptist Church in Wilmington, NC. Mrs. Jackson also served on different committees in later years at Masenboro Baptist Church in Wilmington, NC. At her death, Mrs. Jackson was a member of Lawndale Baptist Church in Greensboro, NC and a member of the Christian Partners Life Journey Group. She was devoted to her family, having been married to her late husband, James Wade Jackson for forty nine years before his death in 2005. She was a loving mother and a devoted Grandmother and Great Grandmother. Surviving is a son, James Allen Jackson and wife Angela of Greensboro, NC, Grandchildren Matthew Ryan Jackson and wife Alyssa of Greensboro, and Katherine Nicole Jackson of Lakewood, Colorado, and one great grandchild, Everleigh Grace Jackson of Greensboro, North Carolina. Also surviving are two brothers and three sisters along with several nieces and nephews. There will be a Memorial Service at Lawndale Baptist Church on Sunday, June 12 at 2:00 PM in the Worship Center led by Dr. Curt Dean and Rev. Marion Boling. Visitation will follow. An inurnment service will be held on Tuesday, June 14 at 11:00 AM at Greenlawn Memorial Park in Wilmington, NC. In lieu of flowers, memorial gifts may be made to the organization of your choice.

The family of Betty Wood Jackson created this Life Tributes page to make it easy to share your memories.

Send flowers to the Jackson family.