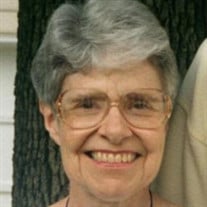 Betsy Brooks McGee McLean passed away on Thursday, September 9, 2021, at Friends Homes West in Greensboro, NC. Born in Greensboro, NC, on December 14, 1931, to William Kay McGee and Muriel Joyner Beaman McGee, Betsy was the oldest of four daughters. After her mother’s death, Betsy and her sisters were raised by her father and stepmother Velma Preslar McGee. Betsy graduated from Reynolds High School in Winston-Salem, NC (1949), Mars Hill College (A.A.,1951), Meredith College (B.A. in history, 1953), and Duke University (M.A. in history, 1957). She taught school in Angier, Durham, and Wake Forest, NC. She later taught at Wingate College, where she met her husband Joe McLean, who was also teaching there. They were married in 1961. She and Joe lived for 32 years in Jackson, NC, where Joe served as pastor of the Jackson Baptist Church and Betsy served in many volunteer roles in the church and community. They retired to Murfreesboro, NC, where she was active in the Murfreesboro Baptist Church and served on the Hertford County Habitat for Humanity Board of Directors. Later they moved to Friends Homes West in Greensboro, NC. Playing the piano and organ, teaching the youth at church, and spending time with her family were favorite pastimes for Betsy. She loved to accompany her children on the piano, and later she delighted in playing the piano and singing with her granddaughters. In addition, Betsy was a talented seamstress and a wonderful cook who prepared many delicious meals from the garden produce that Joe grew. She loved cooking with her granddaughters. The annual trip to the NC State Fair is a favorite family memory. Betsy was married to her beloved husband Joe David McLean for 57 years. She was a loving wife, mother, and grandmother. She dearly loved her children and their families: son David McLean and his wife Linda; daughter Muriel McLean Roberson and her husband Mark. “Nanny” was especially fond of her two granddaughters, Anna Roberson and Laura Roberson. “Brooksie” cherished her three sisters, Kay McGee Phillips, Joy McGee Jacobs, Velma McGee Ferrell, and their families, as well as many other McGee and McLean extended family members. Betsy was beloved for her kindness to her family, friends, church members, and community. She treated people with respect and grace. Betsy especially enjoyed working with youth and was skilled at listening to and encouraging young people. She continued to show interest in and to be supportive of them as they grew into adults. Betsy will be missed by her family and friends. We are grateful that she was a part of our lives. The family would like to thank the staff of Friends Homes West as well as the Hospice Care team at AuthoraCare Collective of Greensboro for their compassionate care. A memorial service will be held on Monday, September 27, at 2:00 p.m. at First Baptist Church Greensboro, 1000 West Friendly Ave., Greensboro, NC 27401. The family will greet guests after the service. The memorial service may also be viewed online at fbcgso.org/memorial. Indoor masking is practiced at First Baptist Church. Memorial contributions may be made to First Baptist Church Greensboro, 1000 West Friendly Ave., Greensboro, NC 27401; Jackson Baptist Church, 306 N. Church St., Jackson, NC 27845; or Murfreesboro Baptist Church, 200 W. Main St., Murfreesboro, NC 27855.

The family of Betsy Brooks McGee McLean created this Life Tributes page to make it easy to share your memories.

Send flowers to the McLean family.