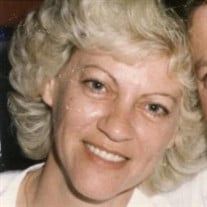 Barbara Anne Turner, Age 78, passed away Tuesday, September 21, 2021 in Greensboro, NC. The family will receive friends on Thursday, September 23, 2021 from 3:00 -4:00 PM at Forbis & Dick Funeral Service, 5926 West Friendly Ave, Greensboro, NC 27410. Final arrangements for the funeral service and burial near Savannah, GA to be determined. Barbara was born in Suffern, New York to the late Rob Roy & Janet LeBaron. She grew up in Waldwick, New Jersey where she met and married her husband of 60 years John Turner. Barbara lived in Washingtonville, New York while raising her son Shane before moving to Greensboro, NC in 1992. She worked for many years as an office manager at various automotive dealers both in New York and North Carolina. Upon retirement, John and Barbara split their time between Greensboro, NC and Pooler, GA to be close to friends and family. Barbara was extremely devoted, proud, and supportive of her family. We are so very thankful that she was able to see her grandchildren mature and graduate from high school. She had a passion for quilting, gardening, mystery novels, and standard poodles. It is impossible to convey in these few words the love and perseverance of a woman who will be deeply missed by friends and family. She is survived by her husband, John Turner; son, Shane Turner, daughter-in-law, Joielle Turner; granddaughter, Briana Turner and grandson, Ashton Turner. Barbara was predeceased by her father, Rob Roy LeBaron and her mother, Janet LeBaron. Flowers should be held until final burial arrangements are determined. Memorials may be also considered for Gateway Church, 1702 Pine Barren Road, Bloomingdale, GA 31302 in her memory.

The family of Barbara A. Turner created this Life Tributes page to make it easy to share your memories.

Send flowers to the Turner family.