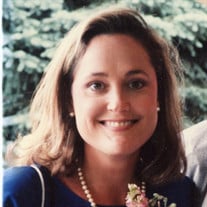 Deanna Hare Truby, age 56, of Greensboro, passed away tragically and unexpectedly on May 18th at Moses Cone Hospital after suffering a brain aneurysm. She was born on August 24th, 1964 in Nashville, Tennessee. In 1996, she married the love of her life, Chuck Truby. Together they raised and adored their two children, Natalie (age 22) and Charlie (age 16). Deanna graduated from Northwest Guilford High School in 1982. She attended Bethany College, where she obtained degrees in Psychology and Religious Studies in 1986. She worked as a Recreational Therapist at Evergreens Senior Healthcare, where she quickly became Director of Recreational Therapy, for 18 years. Deanna adored her work and had a deep love for each of her patients. She left her career in 2005 to spend precious time with her children at home. She was actively involved in the community, including churches, charities and local schools. She served as the Co-Founder and Board Member of the Center for Creative Aging North Carolina. Deanna truly cared for anyone in need at any time. To know her truly was to love her, and she has left a legacy of being a light in the lives of many. Along with her adoring husband and children, she is survived by her mother, Barbara Clippard; her father, Bill Hare and his wife Brenda; her sister, Scarlett Hare McCain; her brother, Henry Hare; her nieces & nephews; and her loving dogs, Harvi & Banjo. A gathering of family and friends will be held at Forbis and Dick Funeral Home – Elm Street on Friday, May 21st from 6-8pm. An outdoor service celebrating Deanna’s life will be held at Westminster Presbyterian Church on Saturday, May 22nd at 11am. In lieu of flowers, please consider donations in honor of Deanna to Peacehaven Community Farm. Address: 1458 NC-61, Whitsett, NC 27377

Deanna Hare Truby, age 56, of Greensboro, passed away tragically and unexpectedly on May 18th at Moses Cone Hospital after suffering a brain aneurysm. She was born on August 24th, 1964 in Nashville, Tennessee. In 1996, she married the love of... View Obituary & Service Information

The family of Deanna Hare Truby created this Life Tributes page to make it easy to share your memories.

Send flowers to the Truby family.