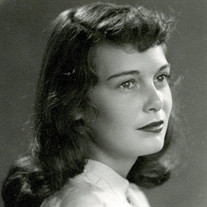 Barbara J. Day, 90 of Greensboro passed away Sunday, January 23, 2022 at Wellington Oaks Nursing and Rehab. Born to the late Daniel Jackson & Carolyn Smith Jackson on September 16, 1931 in Washburn, Maine. She had a wonderful childhood growing up on a farm. She met Keith L. Day and they married on August 4, 1949. Keith and Barbara had five children and moved frequently due to Keith’s job as a Civil Engineer. They eventually ended up in Greensboro. Barbara will be remembered as a wonderful mother, fun loving, caring, giving and a hard worker with many friends. In addition to her parents, Barbara was preceded in death by her husband, Keith, oldest son, David Day and one granddaughter, Stephanie Knotts. She is survived by her children, Nancy Knotts (Charlie) of Greensboro, Donald Day (Rene) of Costa Mesa, CA, Linda Kennedy (Jim) of Pikeville, NC, Lucy Vanderwall (Steve) of Eustis, FL, four grandchildren and seven great grandchildren. A private family service will be held at a later date. In lieu of flowers, memorial donations may be made to AuthoraCare Hospice of Greensboro, 2500 Summit Ave., Greensboro, NC 27405.

The family of Barbara J Day created this Life Tributes page to make it easy to share your memories.

Send flowers to the Day family.