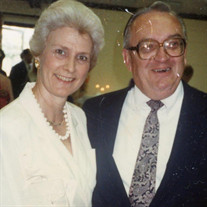 Ray Holt Coble, known widely in the Guilford College Community as “Jack”, 89 died Sunday, January 23, 2022 at Wesley Long Hospital. His wife, Barbara Bayne Coble, 87 died Monday, January 24, 2022 at Wesley Long Hospital. Jack was born November 30, 1932 in Guilford County, NC to the late Joseph Howard and Johnnie Holt Coble. He graduated from Guilford College in 1958, served in the US Army and was the owner of Coble and Co. Realtors. In addition to his parents he was preceded in death by his brother J. Howard Coble. Jack was athletically inclined and thoroughly enjoyed competing with his children and grandchildren in all sporting activities. He had a passion for telling jokes, a gift for writing poetry and a spirit of spreading genuine goodwill. Jack had a unique personality and was widely loved in the community for simply being himself. He never met a stranger and warmly welcomed everyone he encountered. Barbara was born April 5, 1934 in Guilford County, NC to the late Reynolds Esther and Mabel Neal Bayne. In addition to her parents, she was preceded in death by her sister Shirley Wilhelm and brother David Bayne. Barbara was first and foremost a proud mother and grandmother. One of her favorite pastimes was cheering on her children and grandchildren from the sidelines as they participated in sports over the years. She had a special affinity for dogs and raising the annual mallard duck hatchlings from their backyard lake. She enjoyed playing tennis and participated in multiple leagues over the years. Mr. and Mrs. Coble were active in Faith Presbyterian Church in the Guilford College area while raising their family. In later years, they attended Calvary Church as long as their health permitted. Survivors include their four children: Ray Coble and wife Chris of High Point, Mark Coble and wife Barbara of Fuquay Varina, Bryan Coble of Greensboro and Amanda Ratliff and husband Jim of Greensboro; ten grandchildren and seven great grandchildren. Funeral services will be held at 3:00 PM Sunday, January 30, 2022 at Friendly Avenue Baptist Church with Rev. Phil Whitt officiating. The family will receive friends from 1:30 -2:45 PM at the church. Graveside services will be held at 10:00 AM Monday, January 31, 2022 at Westminster Gardens with military honors provided by the Randolph County Honor Guard. In lieu of flowers, memorials may be made to Red Dog Farm Animal Rescue, 8653 NC-65, Stokesdale, NC 27357 or Wounded Warrior Project, PO Box 758516, Topeka, Kansas 66675-8516. Forbis and Dick Guilford Chapel is serving the Coble family. Online condolences may be offered at www.forbisanddick.com.

The family of Barbara Bayne Coble created this Life Tributes page to make it easy to share your memories.

Send flowers to the Coble family.