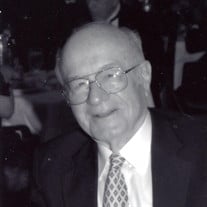 Aubrey Sam Garlington, Jr., 90, died Thurs., Dec. 9th at his home in Willow Way at the Well-Spring Retirement Community in Greensboro, N.C. Born in Seymour, Texas in 1931 and then raised in nearby Vernon, Garlington was a musicologist, opera expert, author, teacher, world traveler and devoted husband and father. He is survived by his wife, Carol, and their two children: Daughter, Meredith (Charlotte) and son, Jeremy (Atlanta), sister, Alice Carol Young, and her husband, Bill (Borger, Texas) as well as various nieces and nephews. Garlington's life spanned nine decades, four U.S. states, six domestic cities and one beloved foreign city and country, Florence, Italy. He lived fully in each place, pursuing his life's vocation: The role of music and the fine arts in the history of Western civilization. As a young boy growing up in the Texas panhandle, Garlington dreamed of faraway places and was an avid reader of Halliburton’s, "Book of Marvels." He later attended Baylor University where he earned a Bachelor's of Arts, Music (1952.) Following two years of active U.S. Army service as a typist stationed in El Paso, Aubrey attended the University of Chicago where he received a Master's of Arts in Music History (1956.) He later earned a PhD in Musicology at the University of Illinois in Champaign Urbana. In 1961, Aubrey joined the faculty of the Department of Fine Arts at Syracuse University. His passion for music and the arts led to two years overseas in Florence, Italy, where Garlington taught on separate occasions in 1965-66 and 1972-73 for Syracuse University. In 1977, Aubrey joined the faculty of University of North Carolina-Greensboro (UNC-G) where he served as a professor of musicology until retiring in 1997. He and wife, Carol, periodically with their children alongside, travelled extensively, visiting destinations in Europe, Russia, Israel, Egypt, Jordan, Australia and New Zealand, among other places. Aubrey was a reader and member of Holy Trinity Episcopal Church for more than 40 years. Garlington's professional achievements earned him recognition as an expert on 19th century Italian opera. He researched, taught and wrote about these subjects extensively. In 2005, eight years after retiring as a full-time professor at the UNC-G, Garlington published a seminal work titled, "Opera, Society and Culture in Florence, 1814-1830: Dilettantes in an Earthly Paradise." This book followed several other titles, articles and studies that he wrote throughout a long distinguished career. Aubrey Garlington will be remembered as an enthusiastic, smart, humorous and joyful individual who loved life, traveling and his family. A private service for close family and friends will be held later this month. In lieu of flowers or other contributions, please consider donating to the Ben Brafford Music Fund at Holy Trinity Church, 607 N. Greene Street, Greensboro, N.C., 27410.

Aubrey Sam Garlington, Jr., 90, died Thurs., Dec. 9th at his home in Willow Way at the Well-Spring Retirement Community in Greensboro, N.C. Born in Seymour, Texas in 1931 and then raised in nearby Vernon, Garlington was a musicologist, opera... View Obituary & Service Information

The family of Aubrey Sam Garlington Jr. created this Life Tributes page to make it easy to share your memories.