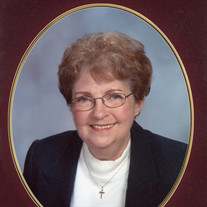 Arleen Christie went to be with her Lord and Savior on April 10, 2021 while in her sleep at Heartland Living and Rehab in Greensboro, NJ. She was 82 years young. Born in Kearny, NJ to Everett and Elizabeth (Kinsella) Wetmore, she was the oldest of four children. She always had a zest for life. After high school, she married and from that union, had four children, whom she loved with all her heart. Starting her working career, she worked in the trucking industry working for many companies eventually becoming a sales person and thoroughly enjoying the interactions with her customers. After an illness in 1994, she left the industry she loved and joined St. Ann Church in Parsippany, NJ. It is there she fell back in love with Jesus and knew she wanted to become more involved with the church. She attended Saint Elizbeth University in Convent Station and obtained a two-year certificate for religious education. While at St. Ann, she became a Eucharistic Minister and enjoyed going to the hospital to visit with patients and give them Holy Communion. She then became a religious education teacher at the church, eventually leading to become the Youth Minister. She loved working with and teaching the youth and absolutely adored all the kids at the church. Some of her fondest memories were going on mission trips with them, as well as going to New York to see the Pope in Central Park. She had many friends within the church and had a special bond with Father Martin and Sister Francis. The later part of her life, she moved in with her son Bob and his family in North Carolina. She was able to attend a new church, meet new friends and have bible studies. She was very grateful that she was able to spend time with her grandson’s Jack and Sam and grand “dog” Rocky. She will be missed by many but know that she is now in the loving arms of Jesus. Arleen is predeceased by her parents, brother Bob, daughter Carol and son Larry. She is survived by her brother Ed Wetmore, sister Dolores Kennedy, son Bob (Leigh) Christie, daughter Cathy (Brian) Burd. Grandkids Jack, Sam, Amy, Brian and Emily, as well as four great grandkids and numerous nieces and nephews. She will be buried at Forest Lawn Cemetery in Greensboro, NC. The family asks that donations be made to your local church to help people find and love Jesus.

Arleen Christie went to be with her Lord and Savior on April 10, 2021 while in her sleep at Heartland Living and Rehab in Greensboro, NJ. She was 82 years young. Born in Kearny, NJ to Everett and Elizabeth (Kinsella) Wetmore, she was the... View Obituary & Service Information

The family of Arleen Christie created this Life Tributes page to make it easy to share your memories.

Arleen Christie went to be with her Lord and Savior on April...

Send flowers to the Christie family.