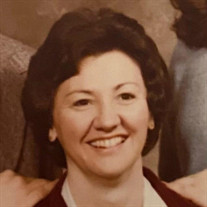 GREENSBORO - Anna Lou McGee Thompson Kutz passed to her heavenly home on Sunday, November 28, 2021. Anna was born on September 21, 1941, in Cordova, N.C. and was a life-long North Carolinian. She was raised in the Baptist denomination. She was the youngest daughter of Katie Henry McGee and Lacy McGee, who preceded her in death. Her sisters, Elsie (McGee) Cox, Virginia (McGee) Conner and brothers, Lacy Jr. McGee, Doug McGee and her first husband, Wayne Thompson, went before her. Anna left behind her sister, Maxine Carpenter and brother, A. W. McGee; a devoted husband, Eugene Kutz; two children who loved her dearly: Melanie Thompson Geller (Ross) and Rev. Gregory Wayne Thompson (Lisa); two step-grandchildren: Shannon Geller McNulty (James) and James Geller and many nieces, nephews and cousins who all thought the world of her as did the extended Thompson family. In 1959, Anna graduated from Rockingham High School. She enjoyed working and retired from AMP, Inc. after 20 plus years of service. Anna was a Christian mother, which she would say was her greatest accomplishment. With her husband, Gene, they were faithful members at Muir’s Chapel UMC until Anna’s dementia prevented her attendance. We thank the staff at Whitestone, A Masonic and Eastern Star Community, for the loving care they provided during Anna’s six years there. Anna’s memorial service will be held at 2:00 p.m. on Saturday, December 4, 2021 at Forbis & Dick Funeral Service, 5926 West Friendly Avenue, Greensboro, NC 27410. The family will receive friends at the funeral home beginning at 1:00 p.m. Memorial donations can be made in Anna Kutz’s memory to Muir’s Chapel UMC, 314 Muirs Chapel Road, Greensboro, NC 27410. Forbis and Dick Guilford Chapel is serving the family.

GREENSBORO - Anna Lou McGee Thompson Kutz passed to her heavenly home on Sunday, November 28, 2021. Anna was born on September 21, 1941, in Cordova, N.C. and was a life-long North Carolinian. She was raised in the Baptist denomination. She... View Obituary & Service Information

The family of Anna Lou McGee Thompson Kutz created this Life Tributes page to make it easy to share your memories.

Send flowers to the Kutz family.