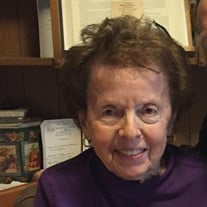 Ann Sladoje Lawhorne, 91, passed away peacefully at home on March 11, 2021, in Summerfield, NC. Ann was born December 30, 1929, in the small coal-mining town of Duncanwood, Ohio, to Marko and Jovanka Tepavcevic Sladoje. Ann was a lifelong student. Even before attending elementary school, she was reading her sisters' textbooks. After graduating valedictorian from Cadiz HS in 1947, Ann moved to Cleveland, where she served as a secretary for the FBI. She later transferred to the Pittsburgh FBI office, where she met Lawrence Lawhorne (Larry). Ann and Larry married at Holy Resurrection Serbian Orthodox Church in Steubenville, OH, in July 1955. Following a move back to Larry's hometown in Buena Vista, VA, Ann worked as a secretary for the VMI Superintendent. Their life together would take them across the US, living in Texas and California before making a permanent home in Summerfield, NC. Ann loved to learn and educate herself. She continued her educational pursuits by enrolling in college courses in every city and town she lived. While Ann obtained her BA in 1977 from the University of North Carolina Greensboro, she continued to take courses well into her 80's. In addition to her lifelong learning passion, she enjoyed cooking, gardening, sewing, and classical music. Ann was an active member of Oak Ridge UMC for the better part of 50 years. Some of her notable roles included choir member, a children's program leader, and she helped to initiate the Chrismons ornament program. Ann was preceded in death by her husband of 39 years in 1994 and her son Lawrence Lee Lawhorne of Mansfield, TX, in 2019. Ann is survived by her daughter Lynne (Kelly) Lawson of Greensboro, NC; daughter-in-law Mindy Lawhorne of Mansfield, TX; grandsons, Mitchell (Taryn) Lawson, Andrew Robison, and Garret Lawhorne; great-granddaughter, Sophia Lawson. Ann is also survived by her sisters, Mary Drazich of Steubenville, OH; Mildred Prosser of Westerville, OH; brothers, Mark Sladoje of Columbus, OH; Donald Sladoje of Ocala, FL; and George Sladoje of Franklin, TN. Ann appreciated the many friends and neighbors in Oakhurst Farms. The family would like to give special appreciation to Loshia Marsan for her dedicated friendship and the care she gave to Ann over the years. Friends are invited to pay their respects at Forbis & Dick -Stokesdale, 8320 US HWY 158, Stokesdale, NC on Friday from 10 until 5 p.m. A graveside service will be held on March 20, 2021, at 2:00 p.m., located across from Oak Ridge UMC, 2424 Oak Ridge Rd. 27310 In lieu of flowers, contributions may be made to Hospice of the Piedmont, 1801 Westchester Drive, High Point, NC 27262 or Oak Ridge UMC, 2424 Oak Ridge Road, Oak Ridge, NC 27310.

Ann Sladoje Lawhorne, 91, passed away peacefully at home on March 11, 2021, in Summerfield, NC. Ann was born December 30, 1929, in the small coal-mining town of Duncanwood, Ohio, to Marko and Jovanka Tepavcevic Sladoje. Ann was a lifelong... View Obituary & Service Information

The family of Ann Sladoje Lawhorne created this Life Tributes page to make it easy to share your memories.

Ann Sladoje Lawhorne, 91, passed away peacefully at home on March...

Send flowers to the Lawhorne family.