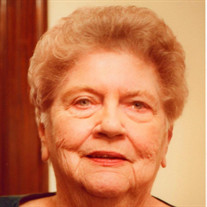 Ada Elizabeth “Bettie” Cates Kemp, 85, passed away late Saturday evening, April 16, 2022, at home. A funeral service will be held at Forbis & Dick Funeral Home at 1118 N Elm St. Greensboro, NC 27401 at 11 a.m. on Friday, April 29, 2022. Following the service, her burial will be held at Westminster Gardens 3601 Whitehurst Rd. Greensboro, NC 27410. The family will receive friends an hour before the service at the funeral home. Bettie was born in Greensboro, NC. She graduated from Greensboro Senior High School, followed by completing her diploma from Greensboro College with a B.A. in Music and Applied Major in Piano and [church] Organ. After graduation, she became the organist at First Congregational UMC, moving to Carraway UMC in 1978 where she was church secretary, as well as music and choir director until 2020. Concurrent to her position at Carraway UMC, she worked for Sears in bookkeeping for their national Contract Sales department, and later for American Express in Authorizations. Additionally, she taught piano by private lesson. Bettie was preceded in death by her parents, Fred and Ruby Cates, her brother William Cates, and her husband of 47 years, Bobby David Kemp. She is survived by her two sons, Christopher Brian Kemp and David Bradley Kemp; her four grandchildren, Christopher “Bird” Kemp, Will Kemp, Ruby Kemp, and Roman Kemp. She was active in fundraising for her church, working many Saturdays at Carraway Church’s “hot dog sale”, which for years, a favorite of many locals and friends of the neighboring Cone Mills White Oak plant. Having passed hours prior to Easter Sunday sunrise, this devout servant of the Lord made her way home to be with her beloved husband Bobby, and her long-time canine companion Nikki, the Maltese, who passed away later the same day. In lieu of flowers, memorial gifts in honor of Bettie Kemp and her pal, Nikki the Maltese, may be made to the following: Guilford County Animal Services @ 980 Guilford College Rd Greensboro, NC 27409 “Have a Heart” Fund, and others: https://www.guilfordcountync.gov/our-county/animal-services/animal-shelter/donate-to-the-animal-shelter Carraway United Methodist Church @ 1301 16th St Greensboro, NC 27405 www.carrawayumc.org

The family of Ada Elizabeth "Bettie" Cates Kemp created this Life Tributes page to make it easy to share your memories.

Send flowers to the Kemp family.